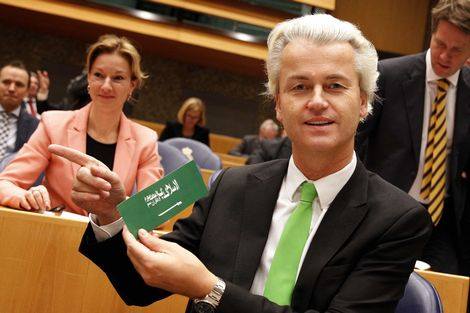 Google has deactivated the islamsticker@gmail Gmail account politician Geert Wilders was using to spread his anti-Islam stickers. The deactivation was probably prompted by the many complaints Wilders’ umpteenth anti-Islam initiative had prompted.

It was the politician himself who reported via Twitter on Boxing Day that his account had been closed. “Unbelievable; Google just blocked the account. It seems Mohammed Rabbae’s complaint was successful,” he tweeted. Rabbae had complained at Google that Wilders was abusing its service.

His complaint – on behalf of the National Council of Moroccans- had been among many complaints that were lodged against Wilders after he came out with his anti-Island sticker a week ago; it read “Islam is a lie. Mohamed is a criminal. The Koran is poison.”

The politician claimed the sticker was not meant as an action against Muslims as the majority of people of this faith is not violent. He has since launched a new account where people may order his sticker.

See also “Email system Gmail has blocked an account set up by Geert Wilders to distribute an anti-Islam sticker, the Dutch politician claimed on Friday.

‘Unbelievable but Google has blocked the account islamsticker@gmail.com. So Mohammed Rabbae’s complaint was successful,’ Wilders said, using the microblogging service Twitter. He was referring to a complaint about the sticker by a lobby group Landelijk Beraad Marokkanen led by former GroenLinks MP Rabbae.

However, according to tech website Techzine, Google’s systems work largely on automatic pilot and there is a good chance multiple complaints about the address had been received, leading the system to automatically shut it down.

The sticker is a play on the Saudi flag and says in Arabic ‘Islam is a lie. Mohammed is a criminal. The Koran is poison’.