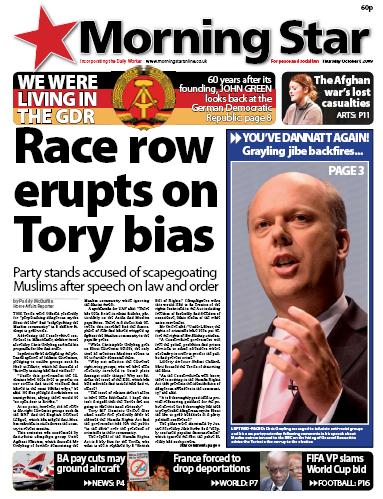 The Tories were blasted yesterday for “perpetuating dangerous myths about the law” and “scapegoating the Muslim community” in a shallow attempt to grab votes.

In particular he dredged up the perennial spectre of Islamic extremism, pledging to outlaw groups such as Hizb ut-Tahrir, which he accused of “actively inciting hate and violence.”

“Under this government the extremists have been free to protest on our streets and incite violence and hatred in the most blatant ways,” he said. He also pledged a crackdown on immigration, saying there would be “no open door to Britain.”

At no point, however, did he refer to far-right extremist groups such as the BNP and the English Defence League, which has staged anti-Muslim marches in cities across the country in recent months.

This omission was condemned by anti-racist campaign group Unite Against Fascism, which accused Mr Grayling of further demonising the Muslim community while ignoring the fascist threat.

A spokesman for UAF said: “There has been a rise in racist attacks, particularly on the Asian and Muslim population. There is a direct link between this increase and the atmosphere of fear and hatred whipped up against the Muslim community in the popular press.

“When Christopher Grayling goes on about extremist beliefs, the only time he mentions Muslims seems to be to further demonise them.

“Why not mention the extreme right-wing groups, who we have seen recently involved in bomb plots amongst other things? Why not address the issue of the EDL which has held marches and incited hate and violence?

“The issue of racism doesn’t seem to have been addressed. I hope this isn’t a signal that the Tories are not going to take this issue seriously.”