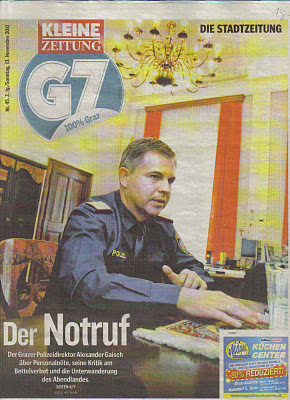 Islam in Europe draws our attention to a interview with Alexander Gaisch, the police chief in the Austrian city of Graz, which was published in the Kleine Zeitung under the headline “We will be slowly infiltrated”.

Asked if a planned Islamic centre in Graz could become “a hotbed of radicalisation”, Gaisch replies:

“In the worst case. There will never be an obvious radicalisation. Swordsmen will not be coming, we will be slowly infiltrated. This population group has more children, a different lifestyle. They are doing this quite cleverly with a building in which many people can be accommodated. It will be more than a mosque: a cultural, social centre with a kindergarten.”

The Kleine Zeitung also reports that Gaisch’s comments have been condemned by the Social Democrats and Greens.

It’s worth noting the context in which Gaisch made these remarks. During a local election campaign in 2008 Susanne Winter of the far-right Freedom Party described the prophet Mohammed as a “child molester” and called for Islam to be pushed “back where it belonged, beyond the Mediterranean Sea”. This was followed by an attack on a Muslim cemetery in the city. Another local FPÖ politician, Gerhard Kurzmann, was later prosecuted (but unfortunately acquitted) on a charge of inciting religious hatred after he posted an online video game in which players were required to stop the construction of mosques by shooting at Muslims.