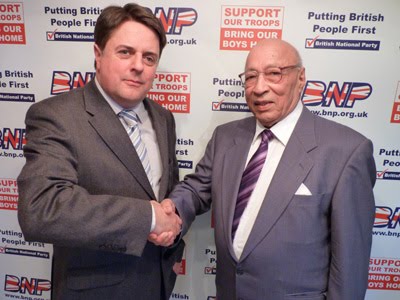 The British National Party’s first ethnic member, Rajinder Singh, has been appointed special advisor on Islamic extremism to Nick Griffin and has been tasked with preparing an initial report on the extent to which British society has already been Islamified.

“Mr Singh has personal experience of the consequences of the Islamification of his home country and is thus in a perfect situation to point out all the tell-tale warning signs,” Mr Griffin said. “His first assignment is to prepare a comprehensive overview of the Islamic presence in Britain and the extent to which that community has been radicalised.

“Topics which will be covered include identifying the ‘tipping point’ at which Muslim numbers become an overwhelming influence; how the Labour and Tory-supported wars in Iraq and Afghanistan have played into the hands of the Islamic fundamentalists; and the use of ‘Islamic centres’ as a means for creating de facto mosques,” Mr Griffin said.

Mr Singh said he was “very pleased” to be taking on this role so soon after having joined the BNP. “I have said all along that the single greatest danger threatening the existence of Britain is the creeping Islamification process.

“If left unchecked, radical Islam will spell the death knell for all other religions and cultures,” Mr Singh said. “I love the Britain in which I first settled, and do not want it to face the same fate as my homeland. I saw with my own eyes the destruction that radical Islamism wrought, and if I can help prevent that happening here, I will have contributed to saving this nation,” he said.