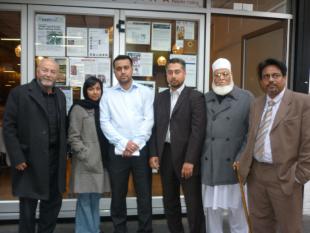 The groom at the centre of the storm over Muslim weddings, Bodrul Islam, spoke out about his anger at MP Jim Fitzpatrick.

“He likened my wedding to the racial segregation, the apartheid, of the Deep South. I am disgusted at this degenerate politics and these insults,” said Mr Islam. “I am announcing today that I am joining the Respect Party. It is the only party standing up against racism and prejudice. And I am pledging my support for George Galloway as he seeks to replace Jim Fitzpatrick as the MP for Poplar and Limehouse.”

Mr Islam continued, “Neither I nor my wife are particularly traditional in our attitudes but we wanted to show respect to our elders and our parents who expect that men and women should be separated in the wedding ceremony. We did everything we could to accommodate Mr Fitzpatrick when we heard he had left the wedding and we were given to understand he was not upset. Imagine our dismay when days later he issued a condemnatory press release and followed it up with a press conference saying he wanted to outlaw what he likes to call segregation at weddings”.

George Galloway and Councillor Abjol Miah welcomed Mr Islam to the party, George thanked him for his pledge of support and Councillor Miah invited him to put himself forward as a candidate for Respect in the forthcoming council elections.

George Galloway went on to attack Fitzpatrick for dangerously pandering to prejudice. “Fitzpatrick is fanning the flames of hate, as the Advertiser correctly described it. He says he wants to outlaw ‘forced’ segregation. But no-one is forcing anyone to go to a wedding. The law he proposes would in fact make weddings where the sexes are separated illegal and would also probably lead to many other events being made illegal, such as women only swimming. The proposal is both dangerous and absurd.”