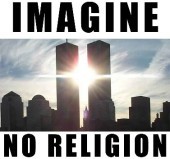 The scientist and secular campaigner Professor Richard Dawkins yesterday said that Europe was a “haven of civilisation” trapped between the Islamic world and the US.

The writer of The God Delusion, speaking at a packed session of the Edinburgh International Book Festival, said that in his view religious belief was not on the wane, even if attendance at churches in the UK was declining.

He said that organised religion in the US – in particular the “mega-churches” of the evangelical denominations – and the world of Islam are having increasing influence.

After saying there was an “increasing Islamic element in this society” in Britain, he added: “It is possible to see Europe as a haven of civilisation, with the pincer movement of Islam on one side and the US on the other.”

Mr Dawkins said, in answer to a question from the audience about the future of religious belief in the world, that the possible growth in Islam while Christianity declines would be a “poor exchange”.

Although Dawkins is commonly described as a “militant atheist”, and his book The God Delusion was marketed under the slogan “imagine no religion”, this evidently does not prevent him from subscribing to the conventional right-wing view that “Christian civilisation” is under threat from Islam. Last December he stated:

“This is historically a Christian country. I’m a cultural Christian….  I’m not one of those who wants to purge our society of our Christian history. If there’s any threat to these sorts of things, I think you will find it comes from rival religions and not from atheists.”