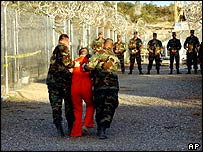 “Accounts of abuses at the actual American detention center at Guantánamo Bay, including Newsweek magazine’s now-retracted article on the desecration of the Koran, ricochet around the world, instilling ideas about American power and justice, and sowing distrust of the United States. Even more than the written accounts are the images that flash on television screens throughout the Muslim world: caged men, in orange prison jumpsuits, on their knees.”