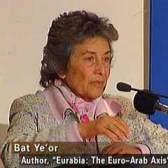 “Bat Ye’or’s most recent book, Eurabia – The Euro-Arab Axis, which was published in English in 2005, could not have been published at a better time as far as she is concerned, precisely when the question of the Muslim immigrants’ integration into the continent and Europe’s cultural coloration is coming up repeatedly for discussion. The terror attacks in Madrid and London, the Prophet Mohammed cartoons, the murder of the Dutch director Theo Van Gogh and the riots about six months ago in the Paris suburbs have made these questions more critical. Europe, with its pluralist and democratic ethos, has hesitated in its reaction to these phenomena, although today there is a move toward policy changes.

“Europe’s hesitation has helped bolster extremist attitudes toward Muslim immigration in particular. In the political realm, this is seen among the far-right movements. In intellectual circles, this is evinced inter alia by people like the provocative Italian journalist and writer Oriana Fallaci, Dutch member of parliament Ayaan Hirsi Ali, and also Bat Ye’or. Although all of these individuals are opposed to the extreme right and its violence, they are warning that Europe as a secular, enlightened civilization with a Judeo-Christian background is dying. In its stead, says Bat Ye’or, will come a civilization subjugated to Islamic forces and their jihad ideology.”