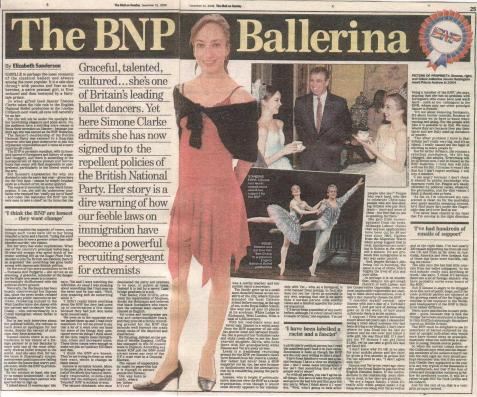 Target the preachers of hate … not Simone

HOW many times did you want to kick in the TV last night?

I was fuming watching Dispatches about the preachers of hate that New Labour have allowed to infest some mosques in this country and who seem to be free to spread their hatred and religious intolerance among young British Muslims.

I am not saying all Muslims are fanatics, but clearly there are some who must now be regarded as the real enemy within.

However, rather than condemning these religious, fascist nutters and calling for the Government to boot them out, the usual suspects on the Left have been busy getting their knickers in a twist about ONE ballerina, Simone Clarke, who’s joined the BNP.

The last time I looked, the BNP was a perfectly legal party in this country.

Don’t get me wrong, I’ve got no time for the knuckle-dragging boneheads and I wouldn’t vote for the bunch of racists if they were the last party in town.

[That seems a little harsh, Jon. After all, you and the BNP have so much in common. – ed]

But if someone wants to join them then surely, in a modern democracy, that’s their choice. However, the fascists on the Left, led by Ken Livingstone’s 100-grand-a-year race relations adviser, Lee Jasper, have been campaigning to get the dancer sacked.

These people are as bad as the BNP. The way to defeat an argument is by debate, not by shouting down an opinion or forcing someone to hide his or her real beliefs.

But what I always find strange is the deafening silence from right-on, Lefty bigots like Livingstone and Jasper when faced with Muslim fanatics like those exposed last night. They are the real enemy of democracy and our tolerant way of life, not some bird in a tutu.

According to the Channel 4 show Blair has even invited some of these preachers to advise him after fellow fanatics slaughtered 52 innocents on 7/7.

For God’s, or Allah’s, sake, Livingstone even used ratepayers’ money to bring some of them to London to spread their peculiar form of tolerance.

Explaining why she joined the BNP, Simone said: “Some of the things they mentioned were the things I think about all the time, mainly mass immigration, crime and increased taxes.”

Simone, whose partner is a Cuban immigrant with a Chinese father, wants tighter border controls and is not in favour of “removing foreigners”.

Does this make her a fascist? Does she deserve the sack for this?

If so, then many of my listeners and readers would be selling The Big Issue too.

The simple, plain, stark facts are that a massive number of people are fed up with this unwanted level of migration into the country and don’t believe that any of the major parties are doing enough about it.

Being against mass immigration is not racist, threatening or dangerous, but allowing people to preach moral, religious and sexual supremacy is.

Anyway, Simone’s views pale into insignificance when compared to the rantings of the sexist, fascist, intolerant fools on display last night. They positively revelled in their extremism and religious intolerance.

They made me sick as they shouted “we Muslims have been ordered to do brainwashing”, “Allah has created the woman deficient, if she doesn’t wear the Hijab we hit her”, “take the homosexual man and throw him off the mountain.”

We should not tolerate fascists who judge people by the colour of their skin, who commit race hate crimes or preach the warped ideology of bigotry and intolerance that was on display in the Dispatches programme.

Race laws should apply to all and we shouldn’t pussyfoot around Muslim fanatics just because they are Muslim. A fascist is a fascist, is a fascist.

On my phone-in on TalkSport, and in my mailbag at The Sun, immigration, along with law and order, are the single biggest issues worrying people.

If the major parties continue to ignore this point and try to keep convincing us that the largest influx of foreigners in our history is good for us then people, even ballerinas who are married to a Cuban-Chinese geezer, are going to continue to turn to the extremist parties.