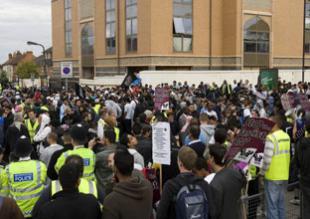 Anti-fascists will hold a unity festival in the face of protest threats by an anti-Islam group. Unite Against Fascism (UAF) is arranging political speeches and entertainment on Saturday, November 23, ahead of a planned rally by Stop Islamisation of Europe (SIOE) on December 13.

Sarah Cox, of Brent and Harrow UAF, said: “It’s fundamentally about bringing the borough together in unity to show, as it showed before, there’s no section of the community that welcomes that kind of bigotry. We want to show that we stand together.”

SIOE, a group of self-proclaimed Islamaphobics, plan to protest outside Harrow Central Mosque, in Station Road, and UAF will hold a counter-demonstration the same day. Referring to SIOE, Ms Cox said: “These people cannot be allowed to march without people showing them how unwelcome they are. Otherwise they just get more confident. They come back for more. They come back after dark.”