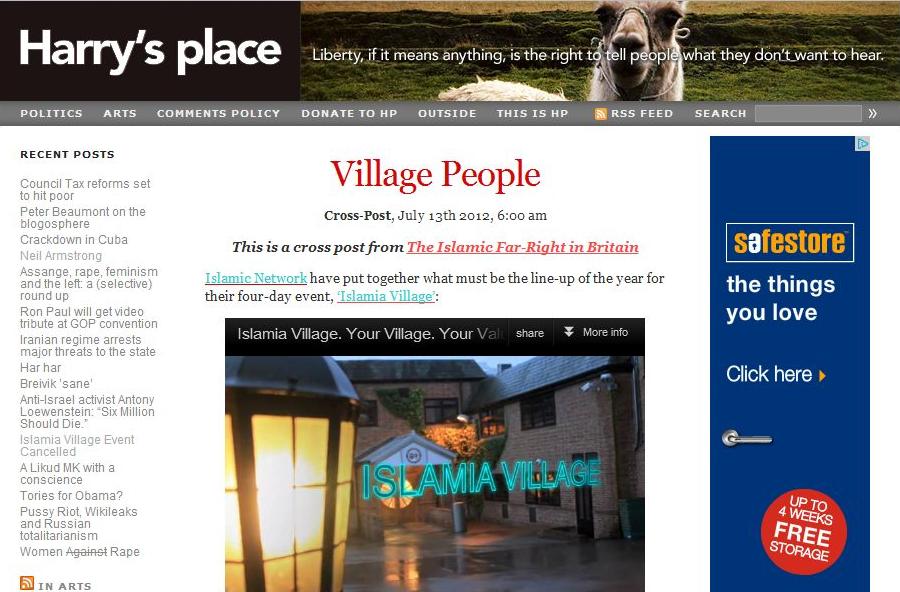 The racist-promoting, terrorism-supporting Zionist blog Harry’s Place has always been keen to expose the online pseudonyms used by its opponents, but this hasn’t prevented its own contributors from hiding behind various aliases. Over the past week, however, two of HP’s contributors have emerged blinking into the light of day.

Over at the Huffington Post, HP regular “Abu Faris” has posted an article under his own name, Ben Jefferies, attacking Egyptian president Mohamed Morsi. Jefferies denounces the Muslim Brotherhood as “clerical fascists in zealot beards and man-nighties who think that rape-victims were asking for it, Jews are to blame for everything, Christians should not be allowed to be president and homosexuals should be thrown off mountains”.

You’ll note Jefferies’ assumption that beards on Arabs are a sign of religious fanaticism and his sneering description of non-western clothing as “man-nighties”. He then proceeds to express his contempt for the Egyptian people as a whole. The only reason the Muslim Brotherhood came to power, according to Jefferies, is that “the general population is so apathetic it can barely bring itself to vote with even a semblance of freedom – and when it does shamble off to the ballots, it votes for bug-eyed religious bigots who genuinely believe that God is talking to them and all the world’s ills are largely the fault of Jews”.

Most people would regard such statements by a white European, particularly one who is actually working in Egypt among the very people he so despises, as distasteful at best if not verging on xenophobia and racism. Yet this passage was happily reproduced by “Alan A” (a pseudonym used by longtime HP contributor David Toube, though in his case he hasn’t admitted to it yet) when he recommended Jefferies’ piece to HP readers.

Another HP contributor to cast aside his cloak of anonymity last week was the individual behind the Islamic Far-Right in Britain blog, with whose assistance HP has recently organised two disgraceful campaigns against Islamic events in London and Yorkshire, resulting in their cancellation due to threats of violence by far-right thugs (see here and here).

The author of the IFRB blog, it turns out, is a former English Defence League activist named Andy Hughes, who has previously operated under the names Harry Burns and Arry Bo. In a comment posted on the deLiberation website Hughes outed himself as the IFRB blogger and in a subsequent exchange with Richard Batholomew confirmed his earlier use of the Harry Burns pseudonym. (That Hughes is also Arry Bo can be verified from the URL to his Facebook page, which appeared under that moniker until Hughes recently decided to dispense with it and use his real name instead.)

Last year Hughes was one of two former EDL members billed as speakers at a Quilliam Foundation event (which fell through after his friend Leighton Evans not only refused to condemn the EDL but did an interview with the Guardian in which, to quote Evans’ own words, he “gave the EDL their biggest rave review”). The advertisement for the event provided the following potted bio of Hughes:

“Harry Burns was formerly a senior member of EDL’s London division. Within London he helped to mobilise members and organise transport for demonstrations outside of London. He was also involved in the group’s logistics and its online activism, helping to run their youth website. He was present at many of their early London meetings.”

So, not exactly a naive individual on the fringes of the organisation who wouldn’t have known that it was riddled from the start with racist thugs and fascists.

Although he says he left the EDL two years ago after he discovered that it hated Muslims, Hughes retains his connections with individuals who have played prominent roles in the movement and in some cases still do. His Facebook friends include Guramit Singh, Darren Lee and former EDL Youth leader Joel Titus.

In a response to an earlier piece on Islamophobia Watch where we drew attention to these links, Hughes airily dismissed their relevance before going on to deliver the following encomium to Joel Titus: “Nice fella, not afraid to get his hands dirty (so what), had his head screwed on, his EDY website only ever covered extremists, no bollocks about halal, rape gangs etc, left EDL himself, still chat once in a while, intelligent kid – best of luck to him.” Yes, he’s referring to this Joel Titus.

The hangover from Hughes’ days in the EDL evidently extends to ideology too. In a recent Facebook comment on a BBC news report, “EU states ‘must be multicultural'”, Hughes wrote: “Fuck multiculturalism and world culture. England and Britain have their own distinctive cultures.” He accepted the existence of what he called “sub cultures within Britain” but objected that they were being accorded equal status “because these cultures are from other countries and that’s the be all and end all for some people”. Hughes went on to express his disillusionment with the existing “patriotic parties” (a term applied by their supporters to parties of the far right) and added: “If a sensible one came along everyone I know would vote for em.”

However, to be fair, when Hughes criticises “sub cultures” for failing to accept their subordinate place within British society he isn’t just talking about Muslims. He has a problem with Jews too. During the fall-out from the cancellation of Quilliam’s EDL symposium last year, Hughes posted the following comment on the Expose Facebook page by way of explanation of his differences with the EDL:

Challenged by his critics over the latter remark, Hughes offered this defence:

And this is the man who asks us to believe that his campaigns against Islamic community events are motivated by a principled opposition to far-right extremism of all varieties.

Still, Hughes does have his supporters. Only today, over at Harry’s Place, one admirer posted the congratulatory comment “Keep up the great work, Andy Hughes”. It was none other than “Abu Faris”.