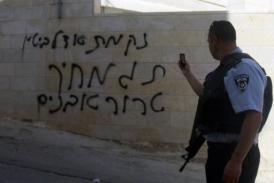 “Settlers came in the middle of the night and wrote threats in Hebrew on the walls of two mosques and slashed the tyres of a car,” said Adel al-Shaer, a councillor for Teqoa village east of Bethlehem.

The attack appeared to be linked to a stone-throwing incident which critically injured an Israeli toddler called Adele Biton in the northern West Bank on March 14.

At one site in Teqoa, the attackers scrawled: “Adele Biton’s revenge” and “Price tag for throwing stones,” and drew two Stars of David around the front entrance with the words: “Regards from Adele,” an AFP correspondent said.

Police spokeswoman Luba Samri confirmed details of the attack, but said that two cars in the village had had their tyres slashed.

Villagers threw stones at police and troops sent to the village to investigate the crimes, damaging some of their vehicles, she added.

Such incidents are known as “price tag” attacks, a euphemism for hate crimes against Palestinians by Israeli extremists.

The attacks began in response to Israeli government moves to dismantle unauthorised settler outposts, but over the past 18 months they have targeted anyone seen as hostile to Jewish settlers.

Perpetrators of such crimes are rarely caught.

In late March, Israel’s internal security service Shin Bet said it had arrested five teenagers over the March 14 attack which caused a woman in a car with her three young daughters to lose control and crash into a parked lorry.