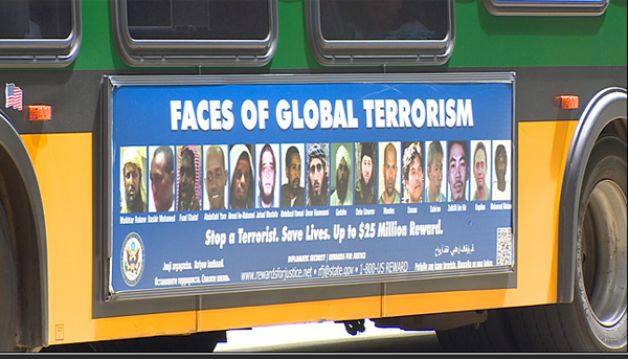 An anti-Muslim organization has sued the King County for refusing to allow the purported hate group to re-run controversial FBI advertisements on Metro buses.

Metro previously allowed the FBI’s “Faces of Global Terrorism” announcements to appear on the buses before the bureau pulled the ads. The FBI ads – which picture 16 terrorism suspects, most of whom are non-white, Muslim and living overseas – were dropped in June over concerns they perpetuated negative stereotypes of Muslims.

The New York-based American Freedom Defense Initiative and organization president Pamela Geller have sued King County claiming the county is violating the free speech rights of the organization’s members by not allowing it to replicate the defunct FBI ads.

Reached for comment Tuesday, a county Department of Transportation spokesman said the county had not yet received the lawsuit. He declined to comment on the allegations.

Geller’s better known organization, Stop Islamization of America, has been named as a hate group by the Anti-Defamation League and the Southern Poverty Law Center. Geller gained some national attention for opposing an Islamic cultural center in Lower Manhattan in 2010, which she and Robert Spencer – vice president of the American Freedom Defense Initiative and a plaintiff in the King County lawsuit – famously and falsely described as a “victory mosque” celebrating the Sept. 11 attacks.

According to the Anti-Defamation League, she and Spencer were cited in the manifesto of Anders Behring Breivik, a Norwegian gunman who killed 77 people on a political retreat. Following the tragedy, Geller said the slain campers were playing “anti-Semitic war games,” had a “pro-Islamic agenda,” and were not “pure Norwegian.”

The pair have also used advertisements on public property to spark controversy, most recently by buying ads in New York City describing Muslims as “savages.” Now, Spencer and Geller would like to replicate an FBI announcement previously posted on the sides of Metro buses as well as billboards around Seattle.

According to the lawsuit filed in U.S. District Court in Seattle, Metro rejected the American Freedom Defense Initiative advertisement on the grounds that it is misleading, demeaning and disruptive. Attorneys for the group contend Metro simply doesn’t like the message and is limiting speech inappropriately.

Among the critics of the FBI ads was U.S. Rep. Jim McDermott, D-Seattle, who faulted the ads for “pointing a finger at a group of people, profiling them.”

“I don’t think that’s fair and I don’t think its good for our society,” McDermott told The Associated Press in June. “It doesn’t make us safer.”

That dispute prompted King County to adopt new rules for bus advertisements. Those rules were in place when the taxpayer-sponsored version of the American Freedom Defense Initiative ad appeared on Metro buses earlier this year.

Attorneys for the group contend Metro’s decision was not a “content neutral” restriction on speech, but was instead a reaction to the point-of-view offered by the group. They’ve asked that the court order Metro to accept the advertisement, and that King County pay for the costs of the lawsuit.

King County has not yet responded to the lawsuit, which was filed Monday.