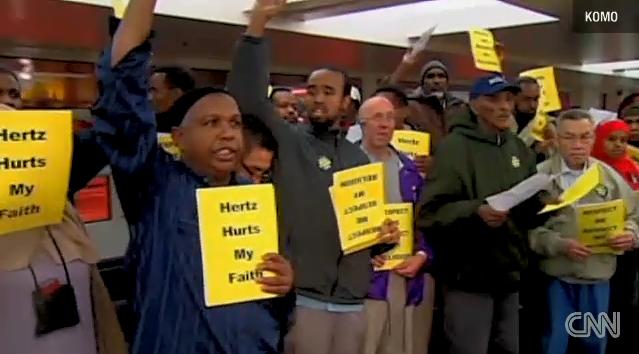 SEATTLE — More than two dozen Somali Muslim drivers for Hertz at Seattle-Tacoma International Airport are being fired after refusing to clock out for daily breaks during which they normally pray.

The 26 workers drive the company’s rental cars to and from the airport for cleaning and refueling. They are among 34 Hertz employees suspended Sept. 30 for failing to clock out before breaks.

Teamsters Local 117, which represents the workers, said Hertz agreed during contract negotiations last year that union members would not need to clock out during prayer breaks. But the company maintains workers were violating a settlement with the Equal Employment Opportunity Commission reached two years ago.

“From our perspective, Hertz didn’t even follow their own internal policy,” union spokesman Paul Zilly said Friday. Hertz didn’t provide a verbal or written warning and jumped right to suspension, he said. “It was a huge disappointment and a tremendous frustration,” Zilly said.

Eight of the 34 suspended workers signed the company’s new clock-out agreement and have returned to their jobs, company spokesman Rich Broome said in an email. Termination letters have been sent to the rest.

“The failure of many employees to return to work promptly after prayers had created an unmanageable, unfair work environment at the Seattle airport location,” Broome wrote. Clocking out ensured that everyone’s interests were preserved, he said.

The company gave suspended workers until the end of the day Thursday to sign the clock-out agreement, if they wanted to be reinstated, Broome told The Seattle Times. The firings were first reported by KOMO-TV.

Zilly said Friday that instead of an ultimatum, the company should have sat down with the union to negotiate this change.

“Whenever there’s a change in working conditions and you’re working under a collective bargaining agreement, they need to notify and bargain with the union over those changes,” he said. “That’s their legal obligation.”

“It’s not about prayer, it’s not about religion; it’s about reasonable requirements,” Broome told the AP earlier this month.

If Hertz thought some employees were abusing the break policies, it should have dealt with them individually, Zilly said.

The union has filed an unfair labor practices complaint with the National Labor Relations Board. The union also said it is also in the process of filing religious discrimination charges with the EEOC.