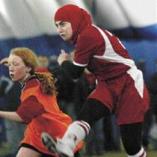 An 11-year-old Ottawa girl who was ejected from a soccer game because she was wearing a hijab is disappointed that the sport’s international governing body has decided to uphold the referee’s decision.

The International Football Association Board had been asked to consider the case of Asmahan Mansour, who was recently ejected from an indoor game in Laval, Que., for wearing a headscarf. The referee said the hijab, traditional headgear for Muslim girls, was a safety concern.

An official of the IFAB, meeting yesterday in Britain, said the existing rules were acceptable.”If you play football, there’s a set of laws and rules and Law 4 outlines the basic equipment,” said Brian Barwick, chief executive of the English Football Association, an IFAB member. “It’s absolutely right to be sensitive to people’s thoughts and philosophies, but equally there has to be a set of laws that are adhered to, and we favour Law 4 being adhered to.”

Law 4 states a player “must not use equipment or wear anything that is dangerous to himself or another player (including any kind of jewellery).”

By coincidence, officials of the International Football Association Board were giving a news conference in England just as Asmahan Mansour’s team took to the pitch in Ottawa yesterday. Azzy was decisive, scoring two goals.

A spokeswoman for a Canadian Muslim women’s group thinks there’s the basis for a human rights complaint in the FIFA decision to maintain a ban on Islamic head scarves on the soccer pitch.

“I think this is something that needs to be taken up with the United Nations in terms of human rights violations,” Anisa Ali of the United Muslim Women of Canada told CTV Newsnet on Saturday. “We, as Muslim women, have a right to participate in sporting activities just like non-Muslim women.” Her group will be taking action “ASAP,” she said.