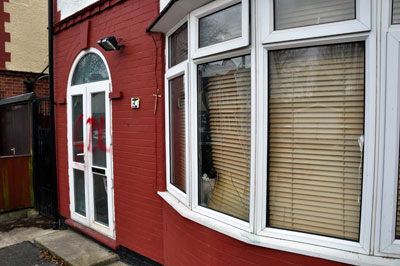 Two homes in Luton were attacked late last night – their windows smashed and the word EDL painted on the front door – just hours after the English Defence League’s racist protest through Luton town centre. The houses are on the edge of Bury Park – where many Asian people live.

Mr Iqbal lives with his mother, brother and sister in one of the houses. He told Socialist Worker, “It happened at around 11.40pm. I was awake but about to go to sleep. I heard a crash and ran to the front of the house to find a brick had been thrown through a window. When I opened the front door, I saw someone had painted EDL on it. I couldn’t sleep – I thought they may come back.”

Mr Iqbal is a Muslim. The other house that was attacked belonged to a neighbour a few doors away – who is a Christian. There is a crucifix on the front of the house, which the bigots of the EDL seemed to miss. The residents stayed up all night, fearful of further attacks.

It is not the first time that EDL supporters have been violent. In Stoke, Asian and white people faced EDL thugs on the rampage during an EDL protest last year.

Dave Barnes, a local Unite Against Fascism (UAF) organiser, said, “Everyone in Luton needs to unite with Muslims against racist attacks, and drive the EDL and racism out of the town. The attacks show why it was absolutely correct to protest against the EDL in Luton on Saturday.”