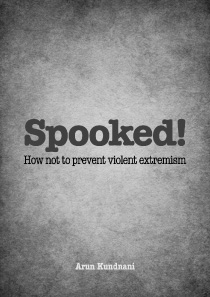 A report published today by the Institute of Race Relations finds that the government’s Prevent programme for tackling extremism fosters division, mistrust and alienation.

Entitled Spooked: how not to prevent violent extremism, the report suggests that the Prevent programme has been used to establish one of the most elaborate systems of surveillance ever seen in Britain.

Moreover, there are strong reasons for thinking that the Prevent progamme, in effect, constructs the Muslim population as a “suspect community”, fosters social divisions among Muslims themselves and between Muslims and others, encourages tokenism, facilitates violations of privacy and professional norms of confidentiality, discourages local democracy and is counter-productive in reducing the risk of political violence.

The report also notes the influence of Ed Husain and his mates on the Prevent programme. It points out that Learning Together To Be Safe: a toolkit to help schools contribute to the prevention of violent extremism (pdf here), produced by the Department for Children, Schools and Families:

“endorses advice from the Quilliam Foundation thinktank about behaviours that ‘could indicate a young person is being influenced by extremists and developing a mindset that could lead them to accept and undertake violent acts’. The indicators listed include: expressions of political ideology such as support for ‘the Islamic political system’, a focus on scripture as an exclusive moral source, a ‘conspiratorial mindset’, seeing the West as a source of evil in the world and literalism in the reading of Muslim texts.

“The Quilliam Foundation is also backing up this advice with its Radicalisation Awareness Programme training for teachers and other local authority workers on how to spot the signs of extremism. The danger with this is that radical religious and political opinions become mistaken for terrorist indoctrination – especially given the potential problems with the Quilliam Foundation’s definition of ‘extremism’.”