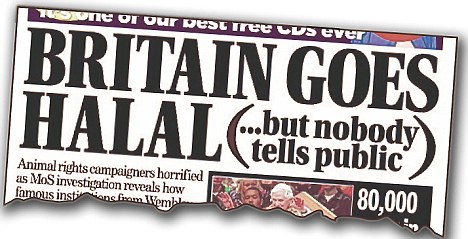 Jon Morgan, farming editor of the Dominion Post, calls on the New Zealand government and meat industry to challenge the anti-halal hysteria promoted by the Daily Mail

Google “NZ halal lamb” and of the 10 hits on the first page, seven are links to stories or comments on the iniquitous New Zealand meat industry and how it is deviously passing off Muslim lamb to British consumers.

This story first broke in September last year when the Daily Mail revealed that 70 per cent of New Zealand lamb sold in Britain was halal slaughtered – and added in its headline: “this is NOT on the label!” It followed this up the next day with a survey of supermarkets who admitted that all their New Zealand lamb was halal, along with 35 per cent of British lamb.

Outraged readers then wrote in to expand on the inferences left for them by the tabloid. Two grievances emerged: Another faith’s beliefs were being forced on them and halal slaughter was cruel. The most popular comments (the Mail has a rating system similar to Facebook’s “like”) were those from people who vowed never to buy New Zealand lamb again. The most unpopular were the few who asked what the fuss was about – “Oh no, I’m going to turn into a Muslim!”

After more than 300 people had had their say, the Mail closed the comments. But the issue didn’t go away. It quickly spread through the internet, discussed on news, food and religious websites, and it still surfaces in the mainstream from time to time. The Google search confirms this.

From this, admittedly small, sample of British opinion it can be assumed an alarming number of people have been put off buying our lamb.

To me, the biggest worry is that at no time during this debate have I seen anyone from our meat industry or the High Commission in London contributing to the online comments with New Zealand’s side of the story.

They could have made some very good points. Such as, lambs are stunned before having their throats cut and the practice meets New Zealand’s animal welfare laws. This was actually stated by a Beef + Lamb representative in the original article but ignored by the outraged commenters. It obviously needed to be reinforced.

The ignorance expressed by the commenters was appalling. Did you know our milk products are also halal? That our Maori freezing workers have all been put out of work by Muslims? I suppose the New Zealand reasoning was that by ignoring it, the issue would go away. But that just gives the ignorant and bigoted free rein to say whatever they like.