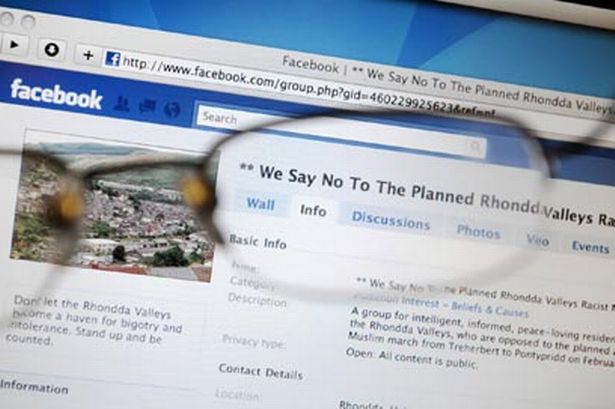 More than 700 people have joined a Facebook group to oppose a proposed anti-Muslim march through the Rhondda, which five men have been arrested and bailed in connection with.

“We Say No To The Planned Rhondda Valleys Racist March” is described on Facebook as “a group for intelligent, informed, peace-loving residents of the Rhondda Valleys, who are opposed to the planned anti-Muslim march from Treherbert to Pontypridd on February 28”.

Police arrested five men for religiously aggravated public order offences two weeks ago, after Wales MEP Jill Evans alerted them to some of the comments being made on the social networking site in relation to the Rhondda March, a group set up to organise a protest in favour of moving Muslim people out of Wales.

Teacher Kelly Robson, who formerly taught French at Porth County Comprehensive School, explained that she decided to set up the opposition group after reading about the Rhondda March on the Rhondda Leader page of WalesOnline website.

The former Treorchy Comprehensive School student said: “I was disgusted by the kind of comments that had been posted on the original Facebook group. I know a lot of people who live in the Valleys and I know the majority of them don’t share these views. So I decided to set up this group so that these people could make their views heard as well.”

Within three days of setting up the group, the 33-year-old received positive messages from anti-racism groups from as far away as Canada, as well as backing from hundreds of supporters, such as Rhondda AM Leighton Andrews and South Wales Central AM Leanne Wood.

“The first group had 150 members but hundreds more people joined this group within a week, which just goes to show how strongly people feel about this,” she said.

Some members of the opposition group have suggested marching on February 28, which was the intended day of the original march. But Mrs Robson has stressed that if anyone decides to organise a protest it should be peaceful.

“I set up this group as a peaceful outlet for residents of the Rhondda Valleys who wish to declare their opposition to an anti-Muslim march,” she said. “I do not wish to antagonise the situation.”

Police have confirmed that they do not believe the Rhondda March will take place but will be monitoring the situation.

The five arrested men have been bailed pending further inquiries until February 28.

No one from the Rhondda March would comment when contacted by the Leader.