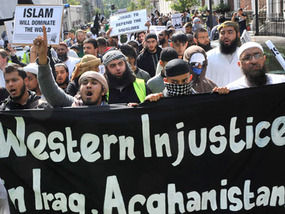 Well, that’s the figure given by the tabloid press for the number of participants at the demonstration by Anjem Choudary’s Muslims Against Crusades group yesterday.

The Mail reported: “A protest by hundreds of Osama Bin Laden supporters sparked fury outside the US Embassy in London today as they staged a mock ‘funeral service’ for the terror leader…. Radicals carrying placards proclaiming ‘Islam will dominate the world’ branded US leaders ‘murderers’ and warned vengeance attacks were ‘guaranteed’.”

The Sun and the Express agreed that “hundreds” of Choudary’s supporters joined the embassy protest.

Even allowing for the fact that an event like Bin Laden’s death would bring a larger than normal turnout, this seems highly unlikely, given that the supporters Choudary is able to attract to his provocative stunts are usually numbered in the tens rather than the hundreds. Indeed, Associated Press reported that “dozens of people” attended yesterday’s demonstration, while Reuters puts the figure at no more than “about a hundred”. Photos of the protest would appear to confirm that the “hundreds” of MAC demonstrators were a figment of the press’s imagination.

But this is what we have come to expect from the tabloid press. They repeatedly boost the importance and significance of Anjem Choudary and his tiny group, suggesting to their readers that he represents substantial forces within Britain’s Muslim communities, when in reality he represents next to nothing. This in turn feeds the paranoid far-right fantasies of the English Defence League, who organised a counter-protest against MAC yesterday. EDL leader Stephen Yaxley-Lennon recently predicted, with an entirely straight face, that “there’s going to be a hundred thousand Anjem Choudarys”.