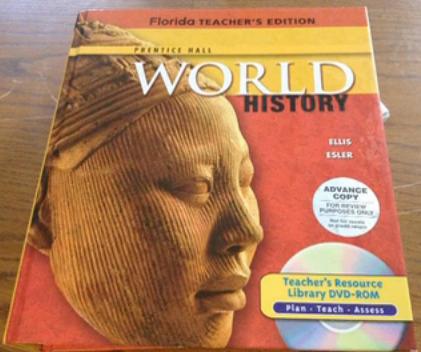 VOLUSIA COUNTY, Fla. — Hundreds of people in Volusia County are preparing a protest against a textbook that’s in public schools across Florida.

They believe a world history book dedicates too much material to Islam and doesn’t focus equally on Christianity and other religions. Some protest organizers want students to go home and tear the section on Islam out of their textbooks.

The controversy started unraveling after a 15-year-old Deltona high school student showed her mom her 10th-grade history book, which has an entire chapter dedicated to Islam but none of the other world religions.

A conservative activist flocked to Facebook, calling for a curriculum overhaul, and nearly 200 activists are planning a protest at tomorrow’s Volusia County School Board meeting.

The mom who started the firestorm did not want to be interviewed.

District 2 Deltona commissioner Webster Barnaby said they just want balance. “Why relegate Christianity to a footnote in an entire history book, and you give an entire chapter on the teachings of Islam?” Barnaby said.

Eyewitness News skimmed through each chapter and found nearly a dozen sections referring to Christianity.

Proponents say people need more time dedicated to the religion because is tied to a great deal of the United States’ foreign affairs, yet few know much about it.

Barnaby agrees people should study Islam, he just feels the other religions, and especially Christianity, should not be a footnote. “To suggest that everybody knows about Christianity, that is total ignorance,” Barnaby said.

The district said it has no plans to change anything about the book.

The Council on American-Islamic Relations issued a statement Monday. “The name of the FB page and intolerant comments is troubling. This group is holding a protest and rally to oppose the teaching of the historical and basic Pillars of Islam to students in Volusia County. This group is displaying an alarming level of intolerance and brazen disregard of minority religions here in the US. We find their  actions Un-American and against every core principal that makes this country so great,” the Muslim civil liberties group said.

Volusia County Schools is one of many school districts in Florida that have chosen Prentice Hall’s World History textbook as a primary resource for teachers to use as they ensure quality instruction on Florida’s Next Generation Sunshine State Standards for World History.

World History was chosen in accordance with the State of Florida’s standard procedure for textbook adoption. First, the State of Florida approves a list of textbooks from which Florida school districts may choose potential textbooks to adopt. As the State is considering which textbooks will make its list, the public is offered the opportunity to participate. World History was one of three state-approved textbooks that met the state’s criteria for the adoption process. A committee of Volusia County Schools Social Studies teachers selected the Prentice Hall World History textbook after reviewing all three potential texts. Volusia County Schools procedures for textbook adoption provide for public participation and viewing of the textbooks chosen by the committee before a final decision is made.

One key factor in selecting a textbook is its ability to accurately convey information aligned to  Florida’s Next Generation Sunshine State Standards (NGSSS). These mandated standards are established by the Florida Department of Education. Teachers may use the adopted textbook, as well as supplemental materials, to teach the mandated standards.

The demonstration is being organised through a Facebook page titled “Protest Rally Against the Pillars of Islam and Curriculum in Volusia Public Schools”.

As you can see, the organiser of the protest, one Rick Sarmiento, has accused Deltona high school of “promoting Sharia Law to our high school students”. He declared:

“WE CANNOT allow our local, state and federal governments to take away our Christian heritage and indoctrinate our youth with the religion of Islam. This is AMERICA for God’s sake!”

Sarmiento also stated: “I will be picking up the curriculum book tomorrow so as to fully comprehend what they are teaching our children.”

In other words, he organised the demonstration before he’d even read the textbook he’s protesting against!