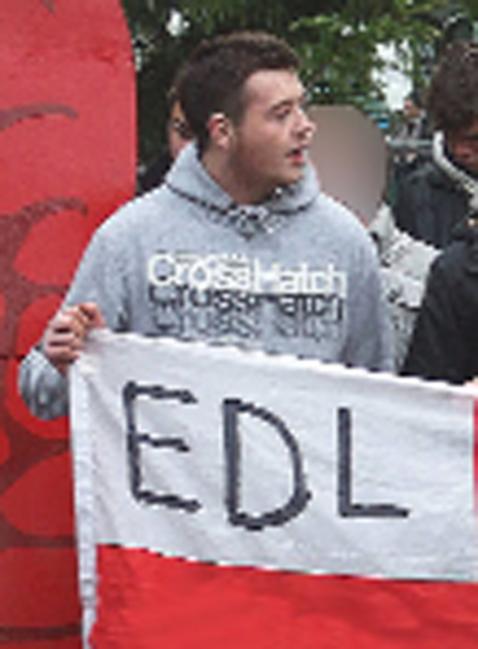 Exclusive pictures of some of the men still wanted by police in connection with the attack on Kingston Mosque, some wielding sticks, have been released by detectives in a fresh bid to hunt them down.

Witnesses said as many as 30 people may have been part of the threatening mob that threw beer bottles, sticks and bacon at the mosque on November 21, 2010. But only three people have been convicted so far for the terrifying assault that left worshippers cowering inside the mosque. Now police are calling on the public and the men who were acquitted to help catch the rest of the thugs.

Detective Sergeant Andrew ‘Charlie’ Morrow said: “There are people probably relishing the fact we have not got hold of them. That is not the case. It is better that they surrender themselves to Kingston police. It will be looked on favourably by the courts, as opposed to us knocking on the door at 6am in a few weeks.”

D Sgt Morrow said the six acquitted men, some of whom claimed they should have been witnesses, not defendants, should now give a fuller account of what they saw.

He said: “We have three convicted and six people who have told us and told the court they were present at the scene. I would appeal to those people to assist us in our inquiries.

Detectives released a picture of a man in a grey jacket with a stick, as well as a bearded man in a camouflage jacket, who one of the acquitted defendants described in court as Ryan. He was one of the men at the front of the group walking toward East Road.

D Sgt Morrow said: “Somebody somewhere is going to recognise them. We have not given up at all.”

Rizwan Khaliq, mosque community liaison co-ordinator, said: “If police feel the people who were on trial were not the ones, the jury said they were not the ones and there are others out there who were responsible for the attack then we should all be looking for them.”

See also “Mosque attack was attack on us all”, Kingston Guardian, 6 April 2012

The most Ben Baty, the organiser of the march, is prepared to say in condemnation of the thugs who attacked Kingston mosque is “I think they are stupid for doing it, it was counter-productive”. He goes on to accuse the mosque of harbouring “extremists”.

The report also notes that “all the defendants denied being connected to racism or the EDL”. This despite the fact that the mob chanted “E-E-EDL” as they launched the attack, while three of the accused – Paul Abley, Jordan Ellingham and Martin Pottle – are all close associates of former EDL youth leader Joel Titus. Unfortunately, of these three only Pottle was convicted of participating in the attack.