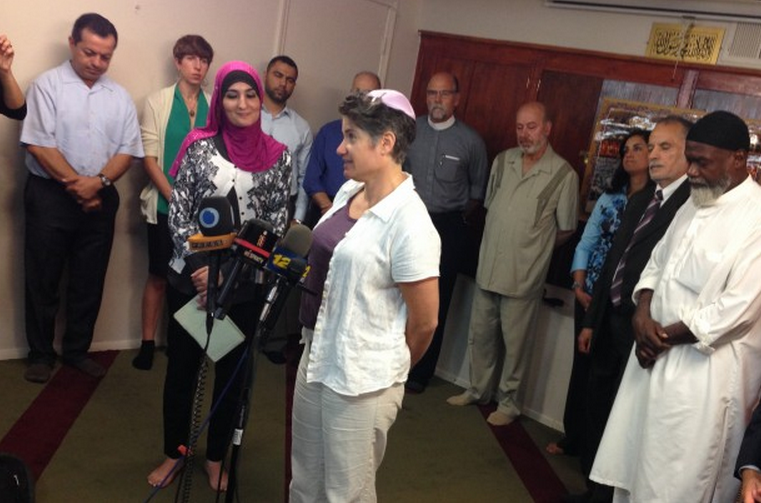 Community leaders of all faiths gathered in Brooklyn on Tuesday to push back on what they described as hateful acts against local Muslim residents.

As the holy month of Ramadan nears to a close, residents were dismayed on when three young men circled a city block at least six times with flashing lights, blaring horns and waving Israeli flags as worshipers were arriving for morning prayers at 4 a.m.

The dustup is the latest in a series of reported bias crimes towards Brooklyn’s Muslim community currently being investigated by NYPD’s Hate Crimes Task Force.

In early July, residents along Ocean Parkway found anti-Muslim graffiti along Ocean Parkway. Last Friday evening, three older Muslim men in Coney Island were pelted with eggs and insults as they walked to the Thayba Islamic Center for prayer. “This is for your Allah,” the assailants allegedly shouted.

Manaf Abdul, 38, of the Thayba Islamic Center said the community is naturally apprehensive. “The community is mainly concerned about its safety,” he said of the mosque. “It’s like a home, and it’s very basic and natural when your home is attacked you feel very unsafe and insecure.”

Even before the reported confrontations, the Police Department already deployed more patrols and cars to certain neighborhoods during Ramadan. In fact, police apprehended the three suspects in the car early Sunday after they stopped the car in from of the religious center, prompting their parents and leaders of faith to apologize to the Bay Ridge group.

No suspects have been named in either the Gravesend graffiti or Coney Island assaults, and it is unknown if they are related. But for those gathered at the Bay Ridge gathering, they all had one thing in common.

“It makes me very deeply sad that anyone would behave in a harassing way to someone else’s worship,” Rabbi Valerie Lieber of the Kane Street Synagogue said. “And it makes me especially sad that it was Jews who were doing this.”

Lieber argued that the disrespect to anybody’s worship is not American or Jewish and “does not help Israel.” “I know many people are very upset about what is happening in Israel and Gaza,” she said, “And yet there are appropriate ways to express yourself — not to harass other people.”

The display of interfaith unity comes after a tense interaction last week between politicians and Jewish leaders who rallied in front of City Hall in support of Israel during the current conflict and spurred a large counter protests outside the iron gates.