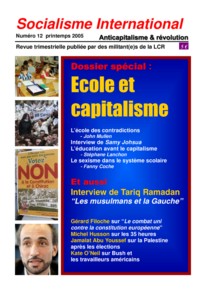 There’s an interesting interview with Tariq Ramadan in the current edition of the French journal Socialisme International. Among other issues, Professor Ramadan deals with the media bias against him, the hostility he provokes among a section of the far left, Islamophobia and racism, relations between Muslims and the left, and his views on Malcolm X and Karl Marx.

The journal is not available online but subscription details can be obtained from their website or from John Mullen at john.mullen@wanadoo.fr

Because of the prominent role he has played in the European Social Forum, Tariq Ramadan has been a controversial figure on the French left. Catherine Samary mounted a vigorous defence of Ramadan’s participation in the 2003 ESF (see here and here), though her article does not pretend to offer an overall evaluation of Ramadan’s ideas and political engagement.

The Tunisian Marxist Sadri Khiari wrote an extended analyis of Ramadan last year for Critique Communiste, a journal published by the Ligue Communiste Révolutionnaire, French section of the Fourth International (see here and here). Ramadan himself argued that Khiari had misunderstood his views, but he has welcomed the opportunity for dialogue, stating that he hoped to find time to write a detailed reply (see Aziz Zemouri, Faut-il faire taire Tariq Ramadan?, pp.258-62).

In Britain, unfortunately, the main source of “information” about Ramadan has been the Alliance for Workers’ Liberty, who have translated and published material from French left-sectarians which offers a highly distorted perspective on Ramadan (see here and here). Last year, the AWL tried to get Ramadan banned from the ESF (see here). For a reply to the AWL, see here.

For the company the AWL keeps, see here and here.