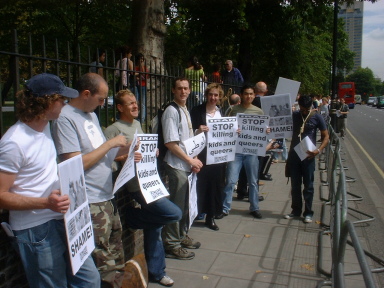 Pedro Carmona writes: “Faisal Alam, a US queer activist of Pakistani origins and the founder of the group Al-Fatiha (made up of US queer Muslims), argues in the magazine Queer that the campaign to condemn Iran was organized without any effort to confirm the veracity of the information on the part of the groups which called for it, in contrast with the three major human rights organizations which advised of the imprecision of the information upon which the protests were based…. Alam frames his discussion of this manipulation in the context of increasing Islamophobia in Europe and North America, and of the ‘Axis of Evil’ campaign of the Washington government….”

Carmona continues: “The anti-Iranian campaign which has been promoted by certain gay and lesbian groups has been based upon strongly biased information, incomplete and on occasions openly untrue. It certainly appears to be a premeditated exercise in misinformation. Likewise suspicious is the warm reception of these mobilizations on the part of conservative groups and parties which have never defended gay and lesbian rights, or which have even promoted openly homophobic initiatives, as is the case of the Republican Party in the US. Unfortunately, the protest campaign, which we should acknowledge at least to be ill-informed and misguided, is now unstoppable despite new data and clarifications. The petitions continue to circulate, maintaining the version that Mahmud and Ayaz were hanged ‘for the mere fact of being gay’. It is comprehensible that our rage at the continued homophobic abuses we see lead us to react immediately and without too much consideration; but these reactions might convert us, while we believe ourselves to be struggling for the liberation of gays and lesbians, into mere puppets of greater interests.”

Another useful exposure of Outrage’s campaign over the execution of two youths in Mashhad, Iran, in July.