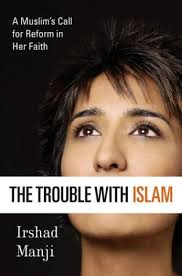 “As Westerners bow down before multiculturalism, we anesthetize ourselves into believing that anything goes. We see our readiness to accommodate as a strength…. Radical Muslims, on the other hand, see our inclusive instincts as a form of corruption that makes us soft and rudderless. They believe the weak deserve to be vanquished. Paradoxically, then, the more we accommodate to placate, the more their contempt for our ‘weakness’ grows. An ultimate paradox may be that in order to defend our diversity, we’ll need to be less tolerant.”

Characteristic of Manji’s method is her reference to the play “Corpus Christi” by Terrence McNally, in which Jesus was depicted as a gay man. She tells us how in 1999 “Christians protested the show and picketed its European debut in Edinburgh, a reasonable exercise in free expression. But Omar Bakri Muhammad, a Muslim preacher and a judge on the self-appointed Sharia Court of the United Kingdom, went further: he signed a fatwa calling for Mr. McNally to be killed….”

Except that, if Bakri had indeed called for McNally to be killed, he would certainly have been prosecuted. In fact, what Bakri did was issue a fatwa “authorising” McNally’s execution by the Islamic state, while making it clear that individuals had no right to carry out the sentence. In other words, short of the establishment of Bakri’s version of the caliphate, which is not exactly an imminent threat, McNally was in no danger at all.

It was a characteristic publicity-generating stunt by Bakri, a loud-mouthed buffoon whose absurd antics have posed a threat to no-one … other than his fellow Muslims, who suffer from association with the stupid provocations he carries out in the name of Islam.

Manji also avoids mentioning the response of the Christian Right when the play was staged in New York the previous year. The Catholic League for Religious and Civil Rights vowed to “wage a war that no one will forget” against the play, while a group calling itself the National Security Movement of America declared they would “exterminate every member of the theater and burn the place to the ground”. These threats forced the cancellation of the production.

(And, by the way, it will come as no surprise that Manji’s article is reproduced by those well-known friends of the Muslim community over at Front Page Magazine.)