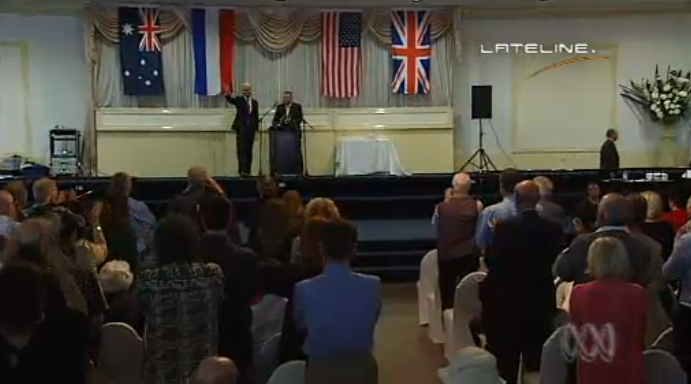 Far-right Dutch politician Geert Wilders has called the Prophet Muhammad a murderer and used Anzac soldiers as an example of the courage needed to speak out against Islam at a speech to Melbourne supporters.

Fifty police, some on horseback, separated about 100 vocal but peaceful protesters standing on the Hume Highway verge outside the venue.

Protest organiser Feiyi Zhang said: “we’re here to show we will not stand for Wilders’ racism and Islamophobia”. She said his speech could incite violence against Muslims “and general fear of Islam”.

Protester Nadia Shamsuddin, a doctor and a Muslim, said she was “repulsed” by Wilders’ visit and views. “His promotion of oppression and racism is appalling in the civilised world”.

Her husband Raj Rao said: “Wilders accuses Islam of promoting hatred and violence but I think that’s what he’s doing.” Mr Rao said the message of the Qu’ran was of “peace and submission to God”.

Inside the venue, audience member Inez, a Dutch immigrant, said she had come from Ringwood to hear Wilders, “because we have built this country into something very, very beautiful but I can slowly see it getting spoiled by people who want to impose their beliefs and laws. When I hear Muslim people wanted to introduce Sharia law here, I shudder. I thought it too horrible to contemplate.”

Mr Wilders spoke to a ballroom usually used for multicultural weddings and debutante balls. The crowd met his speech with standing ovations, laughter at his jokes and applause.

Mr Wilders said the Prophet Muhammad was a savage leader of a gang of robbers that raped and murdered and mutilated its opponents including the Jews in 7th century Medina and violence had carried on to Islam’s modern day supporters.

He said anyone who criticised Islam “is in grave personal danger” and “we cannot continue to accept this”. European countries such as the Netherlands are “in the process of losing our cultural identity and our freedom and I am warning Australia about the true nature of Islam. It’s not a religion; it’s a dangerous and totalitarian ideology.”

By contrast The Australian – which has already given Wilders a platform to incite hatred of Islam, with a much wider audience than the tiny Q Society could ever drum up – accuses protestors of provoking violent clashes outside the venue.

Mr Wilders’s views on the impact of large-scale Islamic immigration in Europe and the challenge that it presents to established cultures and the obligations of citizenship in Western countries are part of an important debate that Australians should be aware of.

Mr Wilders is the founder and leader of The Netherlands Party for Freedom. His political mission is to halt what he says is the “Islamisation” of his country. He argues that Islamism is a totalitarian political ideology enforced by violence and rigid adherence to it, quite different from the faith of Islam. In his article in The Australian earlier this week, Mr Wilders outlined his views that many will find challenging, but they were respectfully put and hardly deserve the vilification he has received from extremists.

Mr Wilders is welcome here, provided that he abides by the law, as all visitors must. Our laws include prohibiting racial vilification and inciting violence, but there is no suggestion he has come close to violating them. So far, it is his opponents who have displayed the illiberalism they accuse him of.

Wilders holds that “Islamism is a totalitarian political ideology enforced by violence and rigid adherence to it, quite different from the faith of Islam”? Where did they get that from? There are of course Islamophobes who claim to make a distinction between Islamism and Islam, but Wilders is emphatically not one of them. In his article for The Australian, he made his views quite clear:

Contrary to what many Westerners think, Islam, rather than a religion, is a totalitarian political ideology. It is an ideology because it aims for an Islamic state and wants to impose sharia on all of us. It is totalitarian because it is not voluntary: once you are in, you cannot get out. Unlike genuine religions, Islam also makes demands on non-Muslims. We, too, are marked for death if we criticise it.

You can only conclude that The Australian‘s editorial writers don’t read their own newspaper.