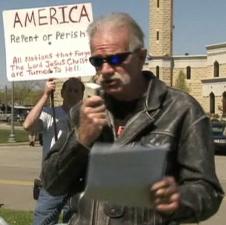 Speaking Saturday in front of the biggest mosque in Michigan, the Florida pastor known for burning the Quran blasted Islam and called upon Americans to take back their country. “Islam has one goal: That is world domination,” said Pastor Terry Jones, wearing sunglasses, jeans and a faded black leather jacket. “It’s time to stand up.”

Holding signs in English and Arabic that read “I Will Not Submit,” about 20 supporters cheered as Jones and his assistant spoke outside the Islamic Center of America, a Dearborn mosque that sits off Ford Road. Framed by the mosque’s minarets, Jones said he’s concerned that the growth of the Muslim population in metro Detroit and the U.S. will lead to the oppression of non-Muslims. “Muslims, no matter they go around the world … they push their agenda on the society,” Jones said. “We must take back America.”

The mosque was placed on lockdown Saturday afternoon with about 30 police cars from Detroit, Dearborn, Wayne County and Michigan surrounding the complex, which also includes several churches. Traffic in and out was prevented, disappointing some worshippers who were not aware of Jones’ rally and couldn’t access the mosque. During the anti-Muslim rally, an electronic billboard at the Islamic Center read: “Happy Easter.”

About 500 feet from Jones was a group of counter-protesters, some of whom were with an activist organization, By Any Means Necessary (BAMN). Police prevented them from approaching the grassy area in front of the mosque where Jones spoke. Muslim leaders had urged people not to attend the counter-protest. Unlike Jones’ last two visits to Dearborn, this one was uneventful with no arrests and no street clashes.

During the talk, some of Jones’ supporters made derogatory remarks and jokes about Muslims. When Jones criticized the Rev. Al Sharpton and the Rev. Jesse Jackson during his speech, one supporter blurted out: “Throw ’em in the pit with the Muslims.”

A crew from Real Catholic TV, a media outlet based in Ferndale, Mich., that’s owned by a member of Opus Dei, was at the rally. Its host, Michael Voris, said he supports Jones’ right to free speech and some of his views. “There are whole sections of London ruled by sharia law,” Voris said. “I think there’s the potential to happen in the U.S. what has happened – and is happening – in Europe.”