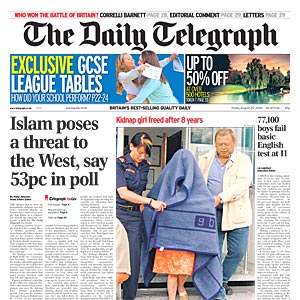 The alleged plot to blow up transatlantic airliners and last year’s terrorist attacks on London have made more people fear Islam as a religion, not merely its extremist elements, a poll for The Daily Telegraph has found.

A growing number of people fear that the country faces “a Muslim problem” and more than half of the respondents to the YouGov survey said that Islam posed a threat to Western liberal democracy. That compares with less than a third after the September 11 terrorist attacks on America five years ago.

The findings were revealed as Ruth Kelly, the Communities Secretary, conceded that the multi-culturalist approach encouraged by the Left for two decades had probably been a mistake and could have contributed to the alienation that many young Muslims said they felt and experienced.

The YouGov survey confirms ministers’ fears that the country is becoming polarised between Muslims and the rest of the population, which is suspicious of them, and that a belief in “a clash of civilisations” has taken root.

Since a similar poll was conducted after the July 7 bombings in London last year, there has been a significant increase in the number of people worried about some of their Muslim compatriots.

The proportion of those who believe that “a large proportion of British Muslims feel no sense of loyalty to this country and are prepared to condone or even carry out acts of terrorism” has nearly doubled from 10 per cent a year ago to 18 per cent now.

The number who believe that “practically all British Muslims are peaceful, law-abiding citizens who deplore terrorist acts as much as any- one else” has fallen from 23 per cent in July last year to 16 per cent. However, there remains strong opposition to the security profiling of airline passengers based on their ethnicity or religion.

A higher proportion than last year now feels that the police and MI5 should focus their counter-terrorism efforts on Muslims and far fewer people are worried that such an approach risks dividing the country or offending law-abiding Muslims.

Most strikingly, there has been a substantial increase over the past five years in the numbers who appear to subscribe to a belief in a clash of civilisations. When YouGov asked in 2001 whether people felt threatened by Islam, as distinct from fundamentalist Islamists, only 32 per cent said they did. That figure has risen to 53 per cent.

Five years ago, a majority of two to one thought that Islam posed no threat, or only a negligible one, to democracy. Now, by a similar ratio, people think it is a serious threat.