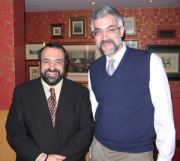 Our friend Robert Spencer was over in the Netherlands last week attending the Pim Fortuyn Memorial Conference at The Hague, along with other sensitive students of all things Islamic such as Daniel Pipes (pictured, with the lovely Robert himself), Bat Ye’or and Andrew Bostom.

All that was required was the presence of Melanie Phillips and Peter Tatchell to present a complete picture of Islamophobic hell.

It was, Robert tells us, “delightful to be in Holland in the company of so many interesting people”. And he treats us to a little anecdote about visiting the Mauritshuis museum to admire the works of Rubens, Rembrandt and Vermeer:

“I couldn’t help but notice that while hijabbed women were common on the streets of The Hague – I’d guess that one out of every 5 or so women I saw in the center of the city was wearing one – there were absolutely none inside the museum. Of course, for a pious Muslim the works of the masters are so much jahiliyya – the products of the society of unbelievers – and hence worthless.

“Of course, everyone is free not to go to a museum, but there is more to it than that. The ideological kin of those who blew up the Buddhas of Bamiyan have entered the Netherlands in large numbers…. But did the people moving through the Mauritshuis with Ibn Warraq, Bat Ye’or, David Littman and me realize how much that ideology imperils the paintings they were so coolly admiring, and the museum in which we were admiring them? I do not think they did. That ignorance, of course, was what our Conference was trying to address.”