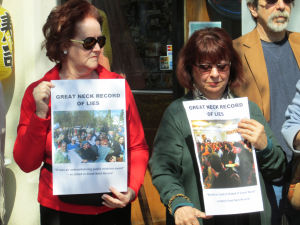 About 40 supporters of controversial Islam critic Pamela Geller rallied outside the Cuttermill Road offices of the Great Neck Record Sunday, protesting what they described as the newspaper’s deceptive coverage of Geller’s speech at Chabad of Great Neck earlier this month.

“What the Great Neck Record did is pretend that this was a non-event,” said protest organizer Jeffrey Wiesenfeld, a CUNY trustee and pro-Israel conservative activist from Great Neck who has drawn controversy himself for his attacks on pro-Palestinian activism at city colleges. “This is a pattern with the Great Neck Record. They report what they want to report.”

Geller’s supporters put out a press release attacking the Great Neck Record for describing the scene as “low key” and an “underwhelming public relations event” with “basically no crowds,” and alleged that the paper had selective printed photographs that did not show the full crowd.

Wisenfeld urged supporters to boycott the Record, write letters to Anton Community Newspaper publisher Angela Anton and petition businesses to cancel their advertisements with the newspaper.

The group of protesters said they were demanding a public retraction and apology from Record editor Wendy Kreitzman, who is the wife of Village of Great Neck Mayor Ralph Kreitzman. “We’re insisting on a public response from this newspaper that is headquartered here in Great Neck,” Wiesenfeld said.

Wiesenfeld and other speakers said the protest was designed to hold the press accountable for accuracy, but one supporter appeared to go off message. When given a turn to speak before the rally, the supporter alleged that the Islamic Center of Long Island has a secret chamber in their mosque where congregants worship the September 11 hijackers.

Islamic Center of Long Island Trustee Faroque Khan rejected the allegation in a telephone interview, saying that the Center rejects violence and has dedicated a peace garden as a memorial to the victims of the September 11 attacks. “There’s no secret room inside dedicated to the hijackers, who we condemn strongly,” Khan said. “No one confirms it, no one calls and we see reports that make no sense in the press.”