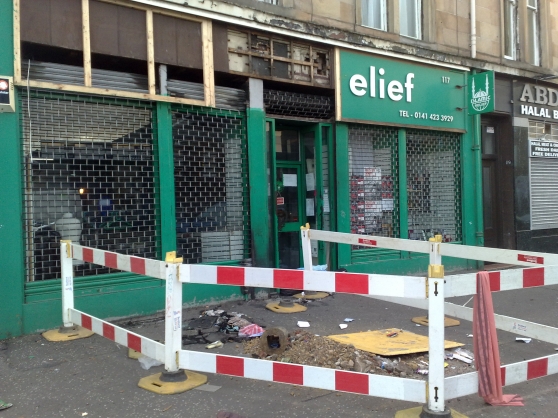 The Glasgow branch of Islamic Relief, a worldwide disaster relief charity and member of the Disasters Emergency Committee (DEC), has been badly damaged after being set on fire in the early hours of Thursday morning.

“This is a huge blow for the local community. Not only is this our Scottish HQ but also our leading charity shop in the country, it is a vibrant hub for the community, with volunteers and donors regularly passing through the doors.

“Unfortunately, earlier this year, during the time of our Gaza Emergency Appeal we received a number of threats of this nature. We are an apolitical charity; we do not take sides in any conflict and simply act to help alleviate people’s suffering. Unfortunately, due to the fact we have the word ‘Islamic’ in our name; we are often an easy target for certain racist and Islamaphobic groups and individuals.

“This despicable incident, which could have easily cost lives, has rightly been condemned by the whole community and by people of all faiths and none. We are genuinely humbled by everyone’s offers of support and we will be working around the clock to get normal service resumed.”

“I have had the privilege of attending many fundraising events organised by Islamic Relief Scotland. At all their events there is always a diverse mix of people from all different backgrounds. I know that this shocking incident will have disgusted many members of the Pollokshields and Glasgow community.

“I have spoken to the police who have assured me they are conducting a thorough investigation.”

“Anyone that would want to attack Islamic Relief, one of the country’s most reputable aid agencies, deserves the opprobrium of everyone in society.

“As a result of this damage, Islamic Relief’s shop is out of action, and they will be raising less money to help the world’s neediest people.

“This also shows not just a misunderstanding of Islamic Relief’s humanitarian work, but also the growing threat of Islamophobia. This appears to be a premeditated attack, perpetrated not by drunken antics at midnight, with the shop set callously alight at 5am.

“We should be thankful that no one in the attached residential buildings was harmed. Given that IR has received many threats warning of this in the past, I hope the police will be treating this as a matter of the utmost seriousness.”