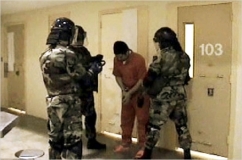 Jose Padilla, a young American convert to Islam, who was jailed without charge in the aftermath of the 11 September attacks and allegedly tortured, was convicted on terrorism conspiracy charges yesterday.

Mr Padilla achieved notoriety when the former US Attorney General John Ashcroft announced on television from Moscow that he was part of an “unfolding terrorist plot to attack the United States by exploding a radioactive dirty bomb” with the intention of causing “mass death and injury.” Despite the hysteria whipped up by Mr Ashcroft, no evidence was ever presented linking Mr Padilla to such a plot.

Yesterday’s verdict was a rare legal victory for the Bush Administration however. It has seen charges thrown out against virtually all those swept up after the al-Qai’da attacks on America. A federal jury took little more than a day to reach its verdict and Mr Padilla, 36, can now expect to spend the rest of his life in jail.

Anthony Natale, one of Mr Padilla’s lawyers said he was never connected to al-Qai’da and had no intention to support terrorism. “In this case, you will see how in the absence of hard evidence, a suspicion can be fuelled by fear, nourished by prejudice and directed by politics into a criminal prosecution,” Mr Natale said.