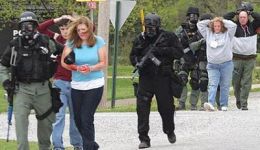 “It really was in poor taste, probably as a result of a lack of cultural prowess on the part of the person who made that choice,” said Ahmed Rehab, executive director of the Chicago chapter of the Council on American-Islamic Relations’.

The drill used simulated blasts, hostage situations and nerve gas to train law enforcement officers how to respond to such situations.

Diana Holmes, coordinator of the Montgomery County Emergency Services and Disaster Agency, said she was unaware of the council’s criticism, the newspaper reported.