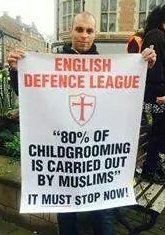 Islamic State extremism and the Rotherham abuse scandal are fuelling a far-right backlash in the UK, one of the Home Office’s most senior advisers on right-wing extremism has said.

The anonymous worker claims the government has overlooked the problem amid its focus on tackling jihadists.

The Home Office says it is working to prevent “all forms of extremism”. But the Institute for Strategic Dialogue claims the government must engage more with the far right.

The senior adviser works directly with right-wing extremists as part of the Home Office’s Prevent strategy, and asked to remain anonymous to protect his personal safety. He says the government has underestimated the threat posed by the far right in Britain.

“This is one of the most worrying periods in right-wing extremism, given the growth in right-wing groups and the recent news events which are making them more angry,” he explains.

The adviser, who has 27 years of field work experience, says he has spoken to several individuals in recent weeks who have displayed real anger at the ongoing conflict in the Middle East – where Islamic State (IS) militants control large swathes of territory in Iraq and Syria.

Membership to far-right groups, he adds, is on the rise. He claims that since last year, at least five new groups have formed, often having branched off from existing groups to follow a stronger ideology and comprising over 100 members.

See also “ISIS and Rotherham fuelling ‘one of the most worrying periods of right-wing extremism'”, Huffington Post, 18 September 2014