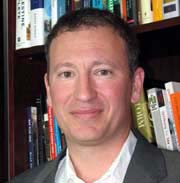 In The Flight of the Intellectuals, Paul Berman argues that it is not violent Islamists who pose the greatest danger to liberal societies in the West but rather their so-called moderate cousins, such as Tariq Ramadan.

Such a reading of contemporary Islamism, however, misses the many nuances of the movement and the real battles between reformers and Salafists.

The ever-excellent Marc Lynch takes on Berman over Islamism, Tariq Ramadan and Qaradawi.