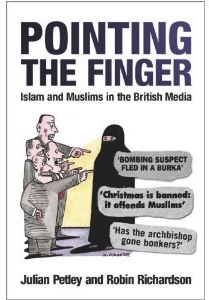 Press TV reports on the launch of Pointing the Finger: Islam and Muslims in the Contemporary UK Media, the collection of articles edited by Julian Petley and Robin Richardson.

Julian Petley, who is a professor of Screen Media and Journalism at London’s Brunel University, said that newspapers in Britain are more inclined toward right-wing perspectives than TV and radio.

Petley said among the British newspapers only the Guardian and the Independent are “to some extent” liberal though the two have a tiny circulation compared with right-wing papers.

Petley added that while TV and radio are generally more liberal than the print media the situation is changing as the private sector – especially media linked to Rupert Murdock – takes hold in the industry.

He said that even the BBC is joining the rightists as TV and radio networks are rapidly moving toward Islamophobic content in line with the shift in the media atmosphere.

He stated that based on their findings, published as part of Pointing the Finger, the Islamophobic content in British media centres on four common clichés about Muslims.

The launch meeting also featured a speech by AbdoolKarim Vakil, joint editor of Thinking Through Islamophobia: Global Perspectives, who described Islamophobia as effectively a new form of racism that tries to reduce Muslims to a race. He added that such attitudes are to be expected from right-wingers yet even leftists in Britain hold racist anti-Islamic views.