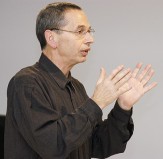 “In recent years the term Islamophobia has been frequently invoked to silence criticism of Islam. Criticisms of any aspect of Islam are looked upon as expressions of a new form of racism. In reality, critics of Islam are questioning the values associated with the religion rather than the racial status of Muslim people. Today, promoting the concept of Islamophobia is about setting up Islam as a criticism-free zone. Recent claims about an ‘epidemic of Islamophobia’ are based on very impressionistic and subjective methodology.”

Frank Furedi, formerly of the Revolutionary Communist Party, in Spiked, 21 May 2007

Perhaps Furedi should have a word with BNP führer Nick Griffin who last year recommended that the fascists should seize “a great political opportunity to surf our message into the public mind on the back of a media tsunami of ‘Islamophobia’.”