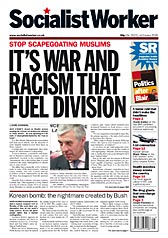 “For many Muslim women in Britain and Europe, the decision to wear a veil is not about ‘internalising oppression’. It is a statement of identity adopted in the face of rising Islamophobia and government demands to step through yet one more hoop to prove you are a ‘good Muslim’.

“Muslim women have been to the fore in the anti-war movement – something that has truly brought people together in common cause and given confidence to Muslim women to speak out.

“It ill behoves middle class Westerners, whether Jack Straw or supposed feminists, to dictate what women should wear. What’s at issue is not women’s rights, but an Islamophobic agenda which is the battle cry of the US led global ‘war on terror’.”

See also “Stop scapegoating Muslims – it’s war and racism that fuel division“, “Jack Straw’s veil comments are ammunition for racists” and “A right wing attack on multiculturalism“, plus reports on the Blackburn demonstration against Straw and the so-called “race riot” in Windsor.