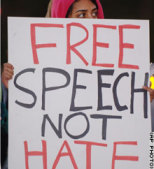 A student panel discussion that included a display of the Prophet Muhammad cartoons descended into chaos, with one speaker calling Islam an “evil religion” and audience members nearly coming to blows.

Organizers of Tuesday night’s forum at the University of California, Irvine, said they showed the cartoons as part of a larger debate on Islamic extremism. But several hundred protesters, including members of the Muslim Student Union, argued the event was the equivalent of hate speech disguised as freedom of expression.

Tensions quickly escalated when the Rev. Jesse Lee Peterson, founder of the conservative Brotherhood Organization of a New Destiny, said that Islam was an “evil religion” and that all Muslims hate America. Later, panelists were cheered when they referred to Muslims as fascists and accused mainstream Muslim-American civil rights groups of being “cheerleaders for terror.”