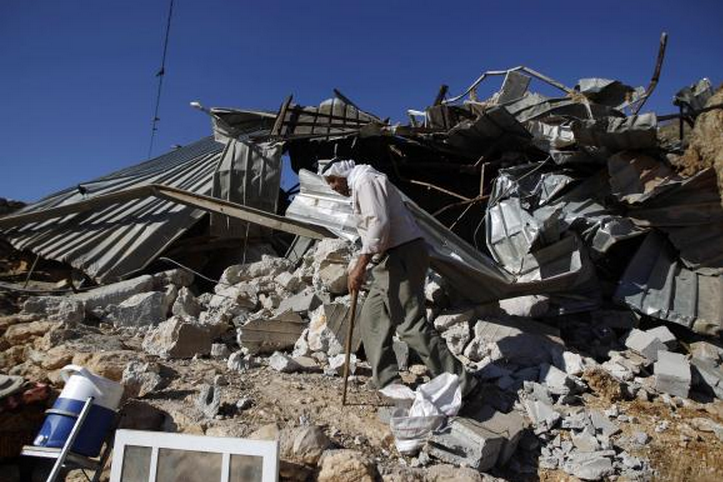 Israeli forces demolished several structures, including a mosque, in a Palestinian village on Tuesday, the day a deadline for a deal in now-frozen peace talks expired.

A Reuters correspondent saw several hundred soldiers deployed in Khirbet al-Taweel, in the occupied West Bank, around daybreak. They guarded six bulldozers that reduced to rubble buildings that were constructed without Israeli permits. Palestinians say such documents are nearly impossible to obtain.

Palestinians saw a link between the demolitions and the passing, without a peace deal, of the April 29 deadline set when the talks began in July. Israel has also drawn Palestinian anger by continuing to expand settlements on land they seek for a state.

Villagers said the stone mosque was built in 2008, and that soldiers removed prayer rugs and holy scriptures before tearing it down.

The Israeli army said in a statement that eight structures, including a “mosque in use”, were demolished because they had been built illegally inside a dangerous live-fire military training zone.

“I went to make my dawn prayers at the mosque and found the army surrounding it,” said resident Abdel Fattah Maarouf, 63. “Then they tore it down. They want this area so they can build settlements in it.”

Speaking on local radio, Yasser Abed Rabbo, a top Palestinian official, said that “unless acts like this cease completely” there was no room to return to U.S.-sponsored peace talks with “this expansionist, racist occupier”.

The pact envisages the formation of a government of non-political technocrats within five weeks and a Palestinian election six months later. Israel said such a government would effectively be backed by Hamas and could not be a peace partner.