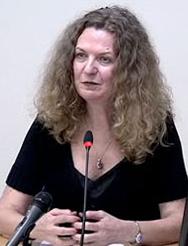 Joan Smith had an article in yesterday’s Independent on Sunday (“Strong religious belief is no excuse for intimidation”) on the theme of Muslim attempts to suppress freedom of expression. Her arguments have been enthusiastically endorsed by fellow liberal Islamophobe Nick Cohen on his Spectator blog.

Smith claims that there has been an upsurge in attempts to intimidate critics of Islam, and gives three recent examples:

It’s been a dreadful week for free speech. A meeting at a prestigious London college had to be abandoned on Monday evening when members of the audience were filmed and threatened by an Islamic extremist. Then the president of a student society at another London college was forced to resign after a Muslim organisation called for a ban on a joky image of the Prophet Mohammed. Finally, on Friday, the author Sir Salman Rushdie cancelled an appearance at India’s largest literary festival, saying he feared an assassination attempt after protests by Muslim clerics.

Let us examine these three cases in turn.

1. It is true that a Muslim extremist barged into a meeting at Queen Mary, University of London where Anne Marie Waters of One Law For All was due to speak on the threat to human rights posed by sharia law. He reportedly took photographs of the audience and threatened them with retribution if they said anything that defamed the Prophet.

If this account of events is accurate, then the individual’s behaviour was indefensible and no doubt very upsetting for those attending the event. However, once the police had been called and the man had left the building, it is difficult to see how the meeting was, as Smith writes, “unable to go ahead”.

(The National Secular Society seems to be aware that this is a bit of a hole in their argument and has claimed that outside the building the man “joined a large group of men, apparently there to support him”. It is notable neither Anne Marie Waters nor Maryam Namazie saw fit to mention the presence of this gang, still less to suggest that it was why the meeting was cancelled.)

2. Then we have the much-hyped “Jesus and Mo” controversy at University College London. The organisation that “called for a ban on a joky image of the Prophet Mohammed” is the Ahmadiyya Muslim Students Association and they have repeatedly emphasised that they are not calling for a ban, but merely asking the student union’s Atheist, Secularist and Humanist society (ASH) to withdraw the cartoon because it caused offence.

Furthermore, Smith’s assertion that ASH president Robbie Yellon was “forced to resign” appears to have been taken directly from the headline to a Daily Mail report. As is usual with the Mail, the headline was intentionally misleading. A spokesperson for ASH in fact stated: “Robbie stepped aside because he signed up as president to organise events and run a student society. He did not appreciate the stress he would be under when dealing with a controversy like this, so he wanted to make way for someone else.”

3. As for the threat to Salman Rushdie in India, Rushdie has claimed that the warning of an assassination attempt was a lie, and while the (non-Muslim) chief minister of Rajasthan insisted that the threat was real the police denied that they had any information about a plan to kill Rushdie.

So, to summarise, we have one individual who disrupted a meeting, a polite request by an Ahmadiyyah student group that an illustration which offended Muslims should be withdrawn, and a dubious report of a threat against Salman Rushdie which Rushdie himself says in baseless. And this supposedly amounts to a pattern of Muslim intimidation of critics of Islam.

You might think that Joan Smith’s ill-researched, inaccurate, dogmatically secularist scaremongering plays directly into the hands of the far right and will be used to bolster a racist narrative about the Islamic threat to the West (which results in real acts of violent intimidation, against the Muslim community and its supporters). You’d be correct.

Update:  Smith’s article has been reproduced in its entirety on the EDL-admiring hate site Bare Naked Islam. 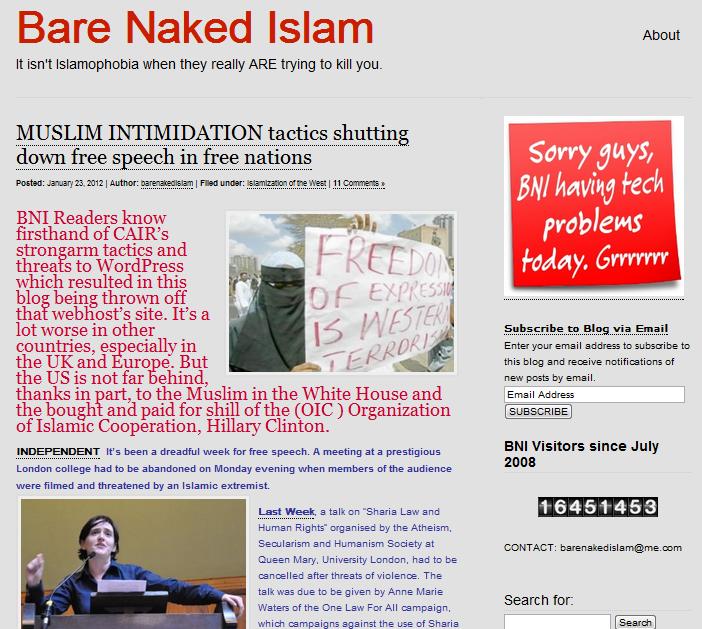