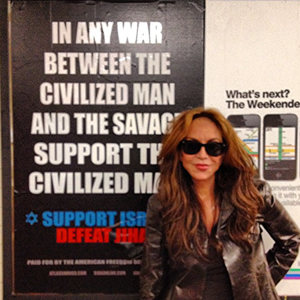 A federal judge rejected a pro-Israel group’s assertion that its free speech rights were violated when the MBTA turned down a subway advertisement on the grounds that the ad was “demeaning or disparaging.”

The ad is paid for by the American Freedom Defense Initiative, a New York organization that seeks to combat the spread of Islam in the United States. With bold, all-capital-letter text placed against a stark black background, the ad reads: “In any war between the civilized man and the savage, support the civilized man. Support Israel; defeat Jihad.”

Officials with the Massachusetts Bay Transportation Authority rejected the ad in November on the basis that it violated the agency’s advertising guidelines, which include rejecting advertisements that demean and disparage individuals and groups, promote alcohol or tobacco, and depict graphic violence.

On Friday, US District Judge Nathaniel M. Gorton sided with the state’s transportation authority, saying in the ruling that “it was plausible for the defendants to conclude that the … pro-Israel advertisement demeans or disparages Muslims or Palestinians.”

MBTA general manager Beverly A. Scott said in a statement that the agency is “gratified” by Gorton’s decision. “We will continue to administer our guidelines evenhandedly, so that our customers will not be subjected to advertisements that demean or disparage any person or group,” the statement said.

While the MBTA applauded the ruling, lawyers for the nonprofit did not, saying an appeal is imminent. “This thing’s just wrong; it’s just wrong,” Robert J. Muise, a lawyer with the American Freedom Law Center, a nonprofit public interest law firm whose mission is to fight for faith and freedom, said during a phone interview. “We’re dealing with government censorship. We’re not talking about Macy’s telling us we have to modify our ad. We’re talking about the government.”

The dispute over the proposed subway poster sprouted from another controversial ad on the Israeli-Palestinian conflict that first appeared in October on 80 posters at T and bus stops. That ad depicts four maps with the title “Palestinian Loss of Land — 1946 to 2010.” Text with the maps says: “4.7 million Palestinians are classified by the UN as refugees.” In response, the American Freedom Defense Initiative sought to put up 10 of its own ads in the same stations where the other posters appeared.

At issue are the words used in the proposed ad, which riffs on statements made by the author Ayn Rand, specifically the use of “savage” and “jihad.” The American Freedom Defense Initiative argued, according to the ruling, that it used the terms war and jihad to “clarify that their message is aimed at people who engage in terrorist acts that target innocent Israeli citizens and not Muslims or Palestinians in general.”

Gorton said the advertisement’s wording was ambiguous and subject to interpretation. And the transit agency did not have to apply the best interpretation of the vague statement but only a reasonable one because the T advertising program is not regarded as a public forum. It was, therefore, “plausible for the defendants to conclude that the … Pro-Israel advertisement demeans or disparages Muslims or Palestinians.”

In contrast, the Palestinian Refugee ad, the judge said, “conveys information that portrays Israel in a negative light” but does not violate the MBTA’s advertisement guideline, as a reasonable person may disagree or dislike it without finding it degrading or reproachful. “Thus, the question is not whether the advertisement upset some transit riders but instead whether a reasonably prudent person would find that it ‘ridicules or mocks, is abusive or hostile to, or debases the dignity and stature of Israelis or Jews,’” Gorton wrote.

“The quote plaintiffs selected to express their message does not criticize ‘savage’ acts but instead contrasts the state of Israel with the ‘savages’ who oppose or fight against it.”