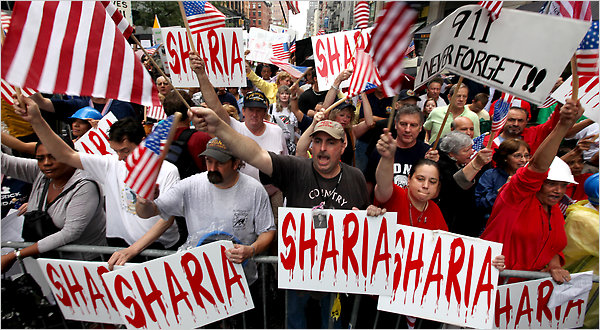 A Manhattan judge has dismissed a lawsuit by a former New York City firefighter who is trying to stop the construction of an Islamic community center in Lower Manhattan.

The former firefighter, Timothy Brown, sought to overturn a decision by the New York City Landmarks Preservation Commission to deny landmark status for a 150-year-old building on Park Place that would be demolished to make way for the center.

The building, which once housed a Burlington Coat Factory store, was damaged in the Sept. 11, 2001, attack that destroyed the World Trade Center two blocks away. Developers of the center, known as Park51, hope to erect a new building that would include a swimming pool, an auditorium and a mosque.

In a decision issued on Friday, Justice Paul G. Feinman of State Supreme Court in Manhattan wrote that Mr. Brown was “an individual with a strong interest in preservation of the building” but added that Mr. Brown lacked any special legal standing on its fate.

The community center project was proposed by a developer, Sharif el-Gamal; the imam of a nearby mosque, Feisal Abdul Rauf; and his wife, Daisy Khan. Critics of the project contended that it was wrong to place a mosque so close to where the 9/11 attack was carried out by Muslim extremists. After a hearing in March, Mr. Brown called the developers “un-American.”

Supporters of the project, including Mayor Michael R. Bloomberg, have maintained that under the Constitution, no one has the right to dictate where a house of worship may be located.

In court papers, Mr. Brown’s lawyers suggested that the decision to withhold landmark status had been influenced by the mayor. A lawyer for the city called that argument “a conspiracy theory” and said the landmarks commission had followed proper procedures.

Mr. Gamal’s lawyer, Adam Leitman Bailey, called the decision “a victory for America” and said: “Despite the tempest of religious hatred, the judge flexed our Constitution’s muscles enforcing the very bedrock of our democracy.”

For mad Pamela Geller this ruling is “another nod for the Islamic supremacists who seek to desecrate the sacred ground of Ground Zero with a 15-story mega-mosque in a building destroyed in the 911 attacks”. According to Geller, Sharif el-Gamal’s lawyer Adam Leitman Bailey is “a true stealth jihadist”.