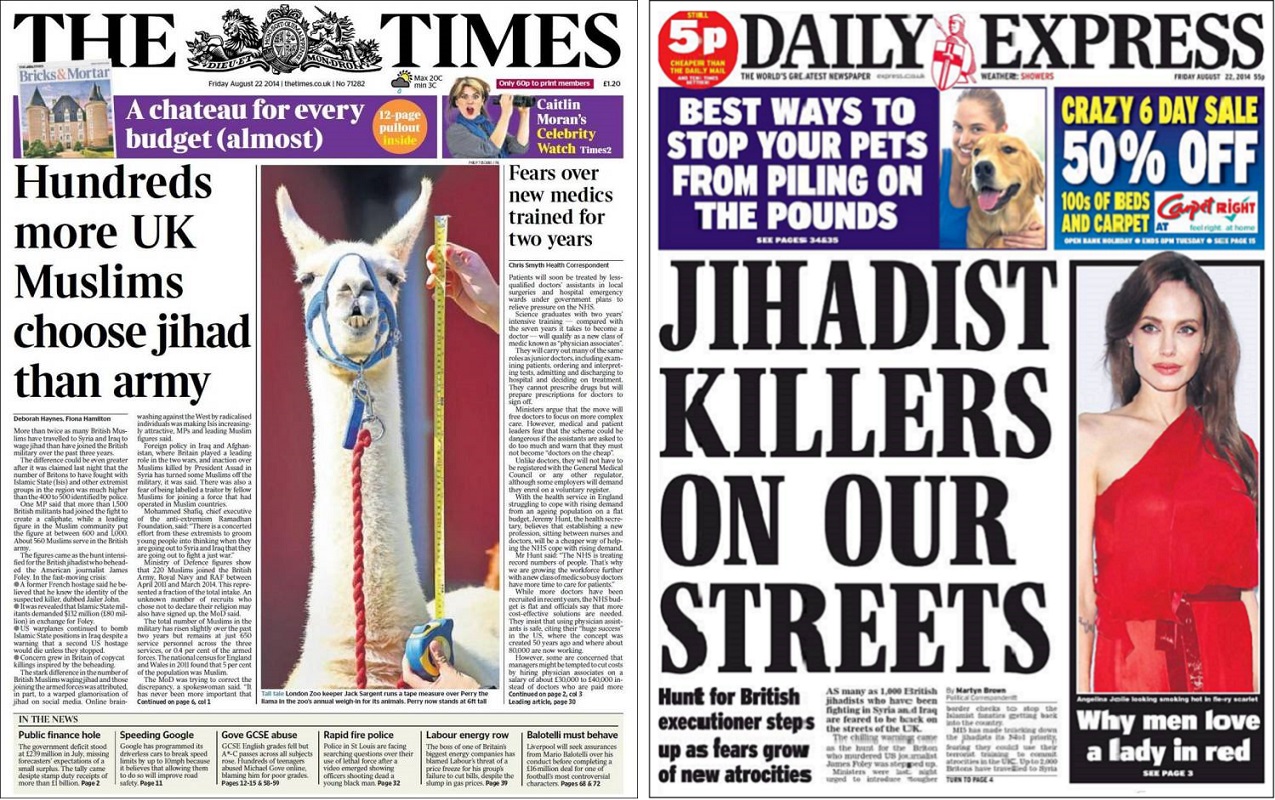 These are the front page headlines from two of today’s newspapers.

The Times headline parrots an earlier Newsweek article entitled “‘Twice as many’ British Muslims fighting for ISIS than in UK armed forces”. The source for this claim is Khalid Mahmood MP, who is a member of the Political Council of the neoconservative Henry Jackson Society and has a record of scaremongering over extremism within the Muslim community, most recently during the so-called “Trojan Horse” witch-hunt of schools in Birmingham.

Mahmood told Newsweek that at least 1,500 young British Muslims have been recruited by extremists fighting in Iraq and Syria over the past three years, whereas there are only 600 Muslims serving in the armed forces (the official figure is in fact 640).

There has been a systematic campaign by the British media to exaggerate the threat posed by young Muslims who have left the UK to fight in Syria, but nobody other than Mahmood himself, who offers no evidence at all to back up his claim, has ever suggested there are anything like 1,500 of them.

A figure of 500, which originates with the Association of Chief Police Officers, is regularly quoted. This is at the high end of the range. The Foreign Office figure is 400, while MI5’s estimate is “several hundred”. Half of these fighters are thought to have returned to the UK.

Moreover, these are the figures for people who have joined all sections of the anti-Assad opposition forces since the civil war broke out in Syria in 2011, not just ISIS. Even those few who sympathise with al-Qaeda would have been far more likely to join its official affiliate, Al-Nusra Front, which has been engaged in armed conflict with ISIS, as have the other Syrian opposition forces.

Of the two hundred or so fighters who have not returned to the UK, only a fraction would have joined ISIS. On official figures, therefore, it looks like we’re talking about perhaps a few dozen people currently fighting for that organisation. This is certainly cause for concern, but it puts matters into perspective.

By the time Khalid Mahmood spoke to the Daily Express he had apparently concluded that the 1,500 figure was an underestimate. The paper reports him as saying that “up to 2,000” British jihadists have gone to fight in Syria and Iraq. Mahmood added:

“There is a real threat to the UK. I would say that up to 1,000 could have already come back here. Some are a threat on our streets now and some, who have been radicalised over there, might decide to reactivate themselves later on.”

Mahmood’s figure of 1,000 returned fighters is four or five times higher than official estimates. In any case, as a study last year of “European foreign fighters in Syria” by the International Centre for the Study of Radicalisation (not an organisation known for its jihadi sympathies) pointed out:

“Many news outlets and analysts frame all foreign fighters as terrorists or al Qaeda-aligned. The reality is more complex … not all rebel forces in Syria are jihadist in orientation, nor are all the jihadist groups linked to al Qaeda. Furthermore, not everyone who has joined a jihadist group has been motivated by a fully formed jihadist worldview.”

This analysis is endorsed by the findings in Asim Qureshi’s CAGE pamphlet, Blowback – Foreign Fighters and the Threat They Pose. It quotes a several young European Muslims who went to Syria to resist Assad, including a British fighter who states:

“I don’t have any plans for waging jihad or any kind of fighting in the UK … we’ve just come for one purpose, to save the oppressed people of Syria from the evil of the terror of Bashar al-Assad, here.”

That seems a reasonable response to the issue. But it is hardly assisted by the likes of Khalid Mahmood providing ammunition for the right-wing press to whip up hysteria over “jihadist killers on our streets”.