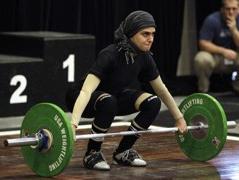 Kulsoom Abdullah has become the first woman to compete in the U.S. weightlifting championships while wearing clothing that covers her legs, arms and head.

Abdullah was cleared to compete in accordance with her Muslim faith after the International Weightlifting Federation ruled two weeks ago that athletes could wear a full-body “unitard” under the customary weightlifting uniform.

Abdullah, a 35-year-old from Atlanta who weighs roughly 105 pounds, lifted before a small crowd Friday in Council Bluffs, Iowa. Wearing a flowing black hijab and matching top with a tan, long-sleeved undershirt and long black socks, Abdullah cleared a snatch of 41 kilograms, or just over 90 pounds, and 57 kilograms in the clean and jerk. Abdullah finished fifth out of six competitors in her weight class.