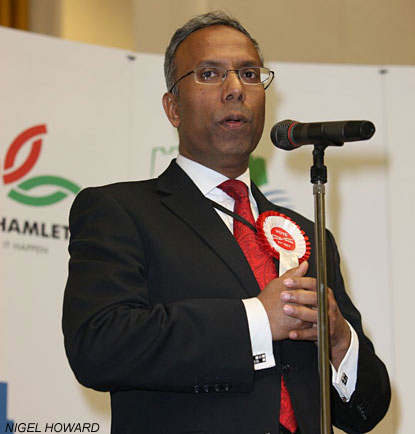 Labour’s NEC has rejected Ken Livingstone’s request for Lutfur Rahman to get back into the Labour party.

The NEC’s organisation sub-committee was setting the process for selecting a Labour mayoral candidate in Tower Hamlets. He or she is now expected to be chosen in April, to give them time to build up a head of steam against Lutfur, who was sacked as Labour candidate in the 2010 mayoral election for his close links to an Islamic fundamentalist group, the Islamic Forum of Europe, which believes in turning Europe into a sharia state. Lutfur is also backed by a group of powerful local businessmen.

Labour MP, Tom Harris, congratulated Labour’s NEC in a tweet: “Well done Labour’s NEC for rejecting Ken Livingstone’s request for Islamist Lutfur Rahman to get back into our party.”

This report is evidently based on a blog post by that poisonous little shit Andrew Gilligan, whose reputation for accurate journalism is, shall we say, poor. So we should perhaps suspend judgment until we get information from a more reliable source. As for Tom Harris, he’s the man who tweeted this response to initial news of the massacre carried out by Anders Breivik.