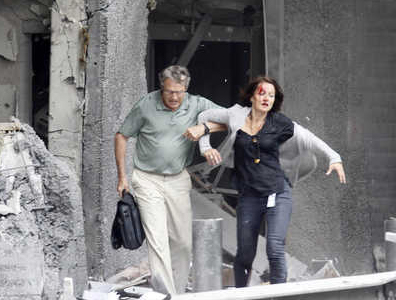 Anders Behring Breivik’s efforts to galvanize anti-Islam sentiment in Norway after last month’s hate killings have given the ruling party he sought to destroy its biggest tailwind in more than a decade.

Support for Prime Minister Jens Stoltenberg’s Labor Party, targeted by Breivik in the July 22 bombing and shootings that left 77 dead, soared to more than 40 percent, two polls showed this week. If a vote were held today, that would be the best result since the 1985 election. Approval of Stoltenberg’s handling of the crisis is at more than 90 percent, polls show.

Breivik’s 1,500-page manifesto, published a few hours before his killing spree, railed against the “Islamization” of Norway and Europe, a trend he said he would try to halt through his terror acts. Yet the anti-immigration Progress Party that Breivik had sought to champion now faces a backlash as a key campaigning point is stigmatized ahead of local elections on Sept. 12. That’s left the group, Parliament’s second-biggest, with an identity crisis.

“They will try to keep a low profile on immigration, immigrants, threats from the Muslims,” Anders Todal Jenssen, a political science professor at the Norwegian University of Science and Technology in Trondheim, said by phone. Without the attacks “they would have focused on immigration as a very important issue,” he said.

Backing for Labor, which was re-elected in 2009 on pledges to improve welfare without raising taxes, surged 11 percentage points in the month through July 30 to 41.7 percent, the highest result since September 1998, according to a Synovate poll. A TNS Gallup poll for TV2 showed a 9.2 point rise in support for Labor to 40.5 percent, a 12-year high. The opposition Conservatives slipped almost five points to 23.7 percent in the Synovate poll, while the Progress Party, of which Breivik was a member from 1999 to 2004, dropped three points to 16.5 percent.

Since the killings, more Norwegians say they now embrace multiculturalism, according to an Aug. 1 InFact AS poll published by Verdens Gang. Twenty-six percent of those questioned said they were more positive toward a multi-ethnic Norway than before the attacks. Nine percent were more negative and 49 percent said they hadn’t changed their opinion.

“The anti-Islam argument has lost its legitimacy,” said Johannes Bergh, a political scientist at the Institute for Social Research in Oslo, in a phone interview. “You can’t make the type of arguments that the Progress Party has been making in terms of Islam being a danger to society or a threat to Norwegian culture. You just can’t say that anymore.”

The prime minister’s party is now poised to win next month’s local elections. Polls before July 22 had shown it was set to lose.