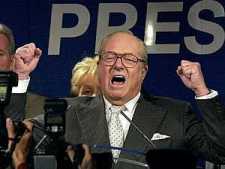 France’s highest court yesterday convicted the far-right leader Jean-Marie Le Pen of inciting racial hatred for telling a newspaper in 2003 that Muslims would one day run France and strike fear into the hearts of the non-Muslim population. The ruling by the Court of Cassation came just over two years after Le Pen was originally convicted in the same case.

In February 2005, an appeals court confirmed the 2004 ruling against the president of the National Front party. Le Pen was ordered to pay a €10,000 (£6,800) fine for his remarks in Le Monde and an additional €5,000 in damages and interest to the League of Human Rights, which had filed suit.

In the 2003 interview Le Pen urged the French to beware of “the day in France when we have 25 million Muslims, not five million” – the estimated population of Muslims in France today – because “it is they who will command”.

Le Pen’s fascist allies in Britain rally to his defence: “Britain isn’t the only country in Europe where free speech is under attack…. Across the Channel, the French government has shown that it is ready to punish those who try and warn their fellow countrymen about the perils of Islamic mass migration…. M. Le Pen’s comments are a personal opinion which, like all personal opinions are valid in a democratic society, but his words of warning are based on facts, hard facts, facts which the French government would prefer to ignore rather than discuss and tackle. Even if current levels of immigration were to cease, the differential birth rates which exist between French natives and Islamic migrants would mean a Muslim majority some time this century…. Those of us living under regimes where ‘the truth is no defence’; whether France, America or the UK, every one of us who is prepared to discuss openly the dangers facing our respective nations faces censure and punishment from the tyranny of political correctness.”

Of course, under British law it would be impossible to successfully prosecute Le Pen for such anti-Muslim comments, following the sabotage of the Racial and Religious Hatred Bill.