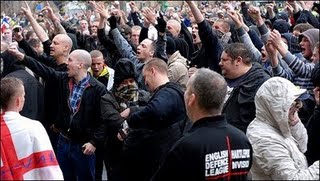 More than 2,000 demonstrators gathered in Leeds city centre amid a heavy police presence as a group staged a protest against Islamic extremism.

Police said about 900 English Defence League (EDL) supporters joined the rally in City Square. They were penned in by a ring of officers.

A rival protest of up to 1,500 Unite Against Fascism (UAF) supporters took place nearby in Victoria Gardens.